Suspected criminals in Bauchi to be empowered if they renounce crimes 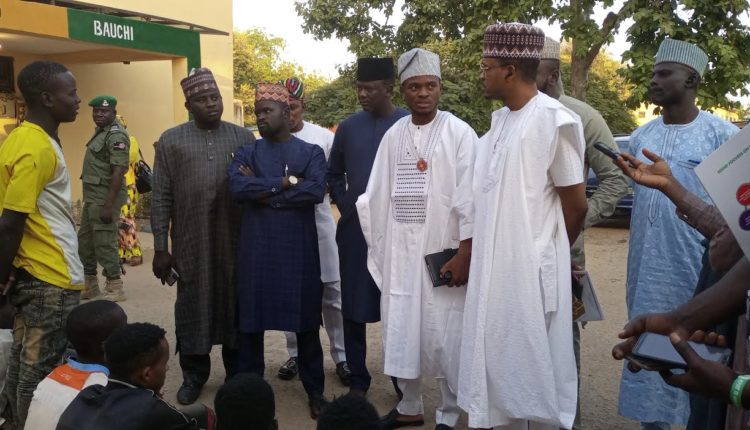 A group of Youths in Bauchi who were recently arrested for various suspected criminal activities have been assured of the readiness to be empowered with skills that will make them useful again to the society if only they renounce criminality and resolve to be good citizens of the country.

The promise was made by the member representing Iseyin/Itesiwaju/Kajola and Iwajowa Federal constituency of Oyo State in the House of Representatives, Shina Abiola Peller who is the Founder of a NGO, Lead Generation initiative when he visited the Bauchi State Police Command headquarters where he had interaction with the suspects.

The federal Lawmaker said that he will use his position as a privileged young man to breach the gap between the poor and the rich in the country in order to have a modest society.

He stated that the youths who were arrested, are young blood and have so much to offer the country in terms of peace, stressing that a country that has peace will be a progressive one.

Shina Abiola Peller said that “I am here today to see the good work the Bauchi State Police Command is doing, most especially during the #EndSARS protest, protecting government infrastructures and also maintaining the good relationship between the Police and law-abiding youths in the state. I am happy to be in Bauchi State to see that the state is the most peaceful that we have been in since we commenced this initiative.”

He added that, “We know, there will always be some bad elements in the state and that is why I decided to have a chat with some of these suspected criminals that have been arrested, to talk to them on what government can do and also how the Police can provide an enabling environment for them to be useful to their immediate environment as well stopping them from engaging in nefarious activities.”

On behalf of the Lead Generation Initiative’s management and members, I want to thank the the police command for the support during the two days training programme,” he said

The founder of the NGO also stated that the aim of the training was to engage the youths in a way that they can be supported and developed in order to become useful to their immediate communities, adding that in the past, there was a wide gap between the poor and the rich as well as the old and young ones which has made youths to lose interest in national issues.

He, however, urged the Police Command to continue to maintain a constant interface with youths through the Lead Generation initiative for cross-fertilization of ideas every month where a Town Hall meeting can be conducted to improve the relationship between the police and the members of the public.

The Federal Lawmaker paid a visit to the Bauchi State Police Command at the end of a two day training tagged ‘Get Involved Leadership Training.”

Earlier, the PPRO, DSP Ahmed Wakili who received the Federal Lawmaker explained that the Command is doing everything possible to make sure that the state is in peace at all times as officers and men are deployed across the state.

He added that the Commissioner who believe in community policing is always engaging various strata of the society in the act of security which he said is the business of everybody stressing that crimes and criminality are in the decline in the state.

The PPRO then assured that the Command is ready to collaborate with NGOs like the Lead Generation Initiatives in the area of re-orientation of the youths for a better society.

Some of the suspects who spoke to Journalists confessing to committing the crimes they were arrested for, thanked the Federal Lawmaker for the gesture promising that if they get out of the situation they will embrace the offer and become good citizens.