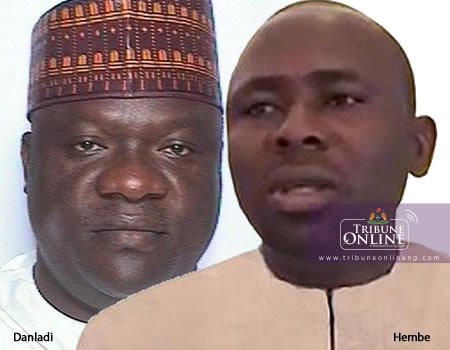 The Supreme Court of Nigeria on Friday ordered the Senator Sani Abubakar Danladi representing Taraba North Senatorial District, to vacate the seat immediately and refund all salaries and allowances he received within 90 days.
The court also declared  Alhaji Shuaibu Isa Lau, as the Senator representing Taraba North.
The apex court also sacked the Federal House of Representatives member representing, Vandikwa/ Konshisha constituency of Benue State, Honourable Herman Hembe and ordered him to return all salaries collected so far before his sack on Friday.
The order sacking the Senator from Taraba was contained in the judgement of the apex court on the appeal filed by Shuaibu Isa Lau challenging the decision of the Court of Appeal that had upturned his victory at the primary on the ground that he was wrongfully substituted.
The apex court, in the judgment also ordered the Independent National Electoral Commission (INEC) to withdraw the certificate issued to Senator Abubakar Danladi and issued a fresh certificate to of return to Isa Lau.

The apex court in the unanimous judgement of a five member  panel and read by Justice Adamu Augie held that the, “Appellant has the right to participate just like any other candidate in the primary and if he feels his right was infringed upon, he has the right to approach the court.
“From   the totality of the appeal before this court, all the issues are resolved in favour of the appellant. His substitution at the primary election is null and void since the appellant scored the highest number of votes, the only option is to declare the appellant as the winner of primary election.
“This court hereby order that the appellant be issued with the certificate of return and the respondent should immediately vacate the seat”, the court held and further ordered that Alhaji Sani Abubakar Danladi to return to the National Assembly all salaries and allowances received as a Senator within 90 days.
Recalled that the  Court of Appeal sitting in Abuja had last year dismissed the appeal filed by Alh. Shuaibu Isa Lau challenging the candidacy of Sen. Sani Abubakar Danladi as the flag bearer of the Peoples Democratic Party (PDP) for the 2015 Taraba North Senatorial Election.
Danladi had approached the Appeal Court which also dismissed the appeal filed by Alh. Shuaibu Isa Lau challenging his candidacy as the PDP flag bearer for the 2015 Taraba North Senatorial Election.
The court held that nomination, sponsorship and substitution of candidate for election was a domestic affairs of a political party and it is outside the jurisdiction of any court as a court cannot impose candidate on a party.
In a related development on Friday, the Supreme Court sacked the Federal House Representatives member representing, Vandikwa/ Konshisha constituency, Honourable Herman Hembe and also ordered him to return all salaries collected so far before his sack from the House.
The apex court, in a unanimous judgment declared Hembe’s election  into the House of Representatives as null and void.
In the unanimous judgment, the court  declared, the appellant, Mrs. Dorothy Mato the winner of the All Progressives Congress (APC) ticket for Vandikwa/Konshisha Federal Constituency of Benue State.
Hembe was elected into the House of Representatives in the year 2015 on the platform of the APC.
The apex court also ordered INEC to issue certificate of return to Mato.
The apex court also ordered Hembe to vacate his post immediately and return all salaries and benefits collected while in office within 90 daysand held that Mrs. Dorothy Mato was the rightful winner of the APC ticket for Vandikwa/ Konshisha Federal Constituency of Benue State.
DanladiHembeNigeriarepsSenateSenatorSupreme Court
Share