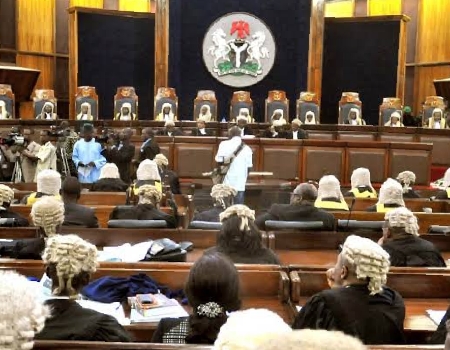 A five-member panel of justices presided by the acting Chief Justice of Nigeria (CJN), Justice Ibrahim Tanko Muhammad announced that the date for the judgment will be communicated to parties in the matter.

The former governor, Abdulazeez Yari faction of the APC, through their counsel, Robert Clarke (SAN) brought the application seeking a review of the consequential order of the apex court which voided the total votes polled by the APC in the election over the conduct of the October 3, 2018 primary of the party.

While arguing the application for setting aside the consequential order that barred its clients from the 2019 general election Chief Clarke informed the court that the order was made out of the jurisdiction.

Clarke disclosed that the APC which brought the application challenging the consequential order was not against the main judgment because the party did not conduct a primary election for nomination of candidates for the 2019 general election.

The senior lawyer who admitted bringing the application for the second time insisted that what the Supreme Court ought to have done was to order for a fresh primary election and election for all elective positions in the state.

He submitted that the consequential order which made the PDP candidates for all elective offices winner was in bad taste and ought to be reversed.

Clarke, therefore, urged the court to invoke its inherent jurisdiction to set aside the consequential order that brought PDP’s candidates to power in Zamfara State and instead should order APC to conduct a fresh primary election and to also order the Independent National Electoral Commission (INEC) to conduct new election into all elective offices in Zamfara State.

However, Senator Kabiru Marafa, who is the first respondent in the matter urged the apex court to dismiss the request of the APC for want of jurisdiction and merit.

Marafa through his lawyer, Chief Mike Ozekhome (SAN) informed the court that the APC’s application was caught by section 285 of the 1999 Constitution which prescribed 60 days for hearing and determination starting from the date the notice of appeal was filed.

Ozekhome argued that the apex court gave final judgment in the Zamfara governorship tussle over ten months ago, adding that bringing such an application for the second time is a gross abuse of the process of the apex court.

The senior lawyer urged the court to dismiss the application with a huge punitive fine to keep the party away from further abuse of the court process.

Ozekhome cited the decision of the court in the Bayelsa and Imo States governorship tussles adding that the apex court has made it clear that its judgment on any issue is final for all times, ages and that no force on earth can change the decision except a law made to that effect.

Ozekhome said the Supreme Court can make consequential order to give justice in a matter.

According to Ozekhome, if the Supreme Court allowed the application, the court will become inundated with applications for judicial review.

It will be recalled that a five-man panel of Justices of the apex court, led by Justice Olabode Rhodes-Vivour, had on August 22, 2019, unanimously struck out the APC’s application for the review of its judgment in the Zamfara governorship matter, on the ground that it was incompetent as the complete judgments of the apex court comprising all the judgments of the five members of the panel being contested by the party were not attached to the application, but it was refiled in November 2019 by the party.

Justice Rhodes-Vivour further held that the consequential orders made in the judgment of the court were part and parcel of the pre-election matter and it was an abuse asking the apex court to review its judgment or orders.

“We don’t seat on appeal over our own decision. We have no jurisdiction over this matter,’’ he said.

Clarke, the counsel to the appellant, had said that the purpose of the appeal was for the apex court to take a second look at its decision and the consequential order and contended that the orders were made out of the jurisdiction and had denied his client fair hearing.

The five-member panel of the court held that “a party that has no valid candidates cannot be said to have emerged winner of the general elections. The runner-ups are expected to be declared winners by the Independent National Electoral Commission (INEC).”

Before the general elections, INEC said it would not allow the APC to field candidates in Zamfara because the party did not hold primaries within the stipulated time.

The controversy among leaders of the party in the state led to the inability to hold the primaries within the stipulated time.

Two different courts, in Zamfara and Abuja later gave conflicting decisions on the position of INEC.

A High Court in Gusau, Zamfara State, ruled that the APC actually conducted primaries in the state and should be allowed to present candidates for the elections while a Federal High Court ruled otherwise.

The Court of Appeal, Abuja Division, on February 21 set aside the judgment of the Federal High Court, Abuja, for “lack of jurisdiction” on the part of the lower court.

Stampede as another mild fire erupts at site of Lagos explosion