Students, youth on rampage as truck kills four in Ibadan 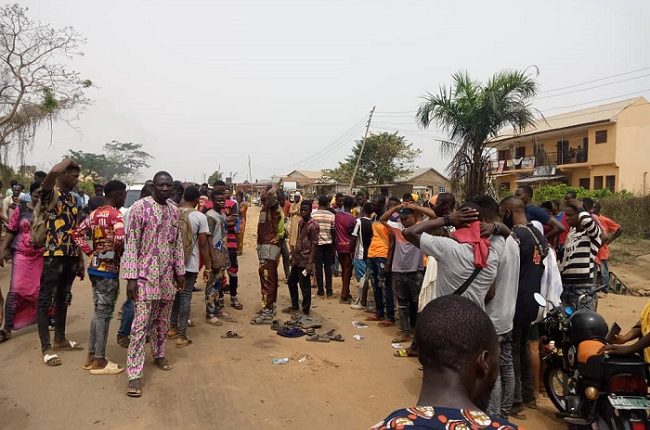 Students and youths went on a rampage at Erunmu area of Ibadan as a truck killed four persons that include three students of Idi Ito High School on Monday.

It was gathered that the four affected students were of the same father who also died just over a month ago.

Hell was let loose when the students, upon hearing about the incident, refused entreaties of their principal and teachers not to leave the school and went out in protest.

For over three hours, vehicular movement was obstructed as the aggrieved students and youths set bonfires, formed a barricade in the Erunmu-Lalupon road while burning no fewer than three vehicles.

When Nigerian Tribune visited, the sandals of the deceased were seen gathered, as well as the crushed bike, a dead ram and the killer truck set on fire.

At the height of the agitation, commercial operators at Olodo parked their vehicles and motorcycles, while many people amid fear took to trekking distances to get to their various destinations.

In what they described as another harvest of death too many, the agitated protesters noted the imperative for the Oyo State government to urgently dualise and erect bumps on the road.

As the agitation subsided upon the intervention of the police, Amotekun and Operation Burst, the protesters only allowed vehicles and motorcycles to pass if they had leaves stashed.

She, however, said that one of the four students regained consciousness after the victims were rushed to the hospital. 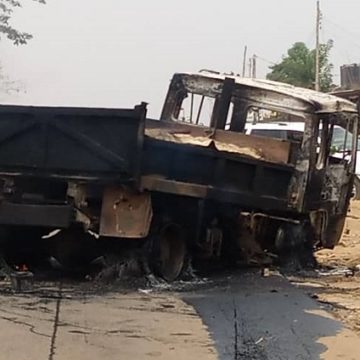 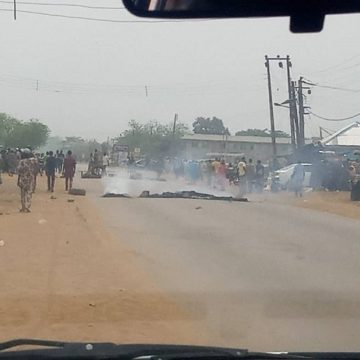 Uche said, “We were just called for a rescue and at the time my team got there around 8:45 am, we were able to rescue the victims and take them to the hospital.

“Initially, they thought the five of them were dead, but by the time they got to the hospital, the female among them regained consciousness.

“The total number involved in the crash is six people. Four killed, one injured (female) and recovered while the tipper driver is at large.

“Meanwhile, I understand that the victims were students of Idi Ito High School. After the accident, the students took the law into their hands, started burning, destroying vehicles and disrupting the peace of the environment.

“As at the time of filing the report, they have burnt down three tippers. We had to invite other security agencies including Operation Burst, Nigerian Police. We are all there together seeing what we can do to bring down the tension in the community.”

On what led to the accident, Uche said, “My boys said they noticed it was due to over-speeding and loss of control on the part of the tipper driver. But on the side of the motorcycle, you could see that the bike was overloaded and this is one of the things we preach to road users not to engage in overloading, whether it is a bike or a car.

“If that bike was carrying just the normal required stipulations of the rider and a passenger, we would have been having just two casualties in our hands and not this number we are talking about, that is why we always frown at overloading.”

In the penultimate week, (March 7 – 13), there were 2,300 cases, a reduction when compared to the 2,817 recorded in the previous week’s (February 28 – March 6)…Agro-industrialisation: Cross River fabricates easy to operate utility machine for farmers

At about 25 minutes, the train slowed down at the uncompleted Omi-Adio terminal, a village on the Abeokuta/Ibadan expressway; it’s a stone throw from Apata in Ibadan. Conveyance of passengers from there and other terminals has not kickstarted as the terminals are still under construction and workers were found there…Agro-industrialisation: Cross River fabricates easy to operate utility machine for farmers