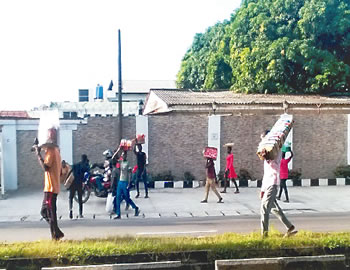 As the Lagos State government commences full implementation of the law banning street trading in the state today, a showdown seems inevitable between the Task Force, empowered by law to enforce the ban and the traders.

Governor Akinwunmi Ambode, last Thursday, ordered the implementation of the law, prescribing jail term of six months or N90,000 fine, or a combination of both, from July 1, which was last Friday.

Despite the pronouncement, street trading went unabated all through the weekend in the state, in almost all the areas with heavy traffic.

Both buyers and sellers are now to be prosecuted.

The Environmental Offences Task Force told Lagos Metro on Sunday, that full implementation would begin today, until the state is rid of street trading.

Lagos Metro’s survey since the order was made showed a resolve on the part of the street traders to call the bluff of the government.

Lagos Metro, on Sunday, saw street traders carrying on with their activities.

A trader in Ketu, Ogbonna, said government was yet to enforce the law and news had been reaching them in the area that total enforcement begins today.

Hawking on the Ketu , Berger axis Sunday afternoon continued as usual. A few traders were seen displaying goods of different sizes and shapes, with items like gala, soft drinks, air freshners and other goods up for sale.

From Iyana Ipaja via Lagos/Abeokuta Expressway en route Ikeja, where there was free flow of vehicles,  street trading activities were  minimal.

Along the Anthony, Maryland underbridge area, hawkers seemed to have neglected the area and no traffic was observed.

The enforcement of the ban is in line with Section one of the Lagos State Street Trading and Illegal Market Prohibition Law 2003.

Helen, an Igbo girl hawking groundnut at Maryland said she had no chioce but to relocate.

Another hawker said that the ban was a bad one targetted at the downtrodden “like us, who are on the street struggling to make a living. The government should reverse the ban and give us the oportunity to make honest living because this ban will affect hundreds of thousands of young boys and girls, and this will likely lead to increase in crime in the state. The state has no job for us. The companies we sell their products and the buyers will surely be affected.”

Meanwhile, the Lagos State Task Force on Environmental Sanitation (Task Force) said its operatives will be out today to enforce arrest of traders and hawkers on streets of Lagos, as well as those who patronise them.

According to the agency, the enforcement would be done in collaboration with Kick Against Indiscipline (KAI) and the Mobile Courts.

Governor Akinwunmi  Ambode had, while speaking on a TVC programme, directed  that as from July 1, the arrest and prosecution of those who engage in street trading and hawking, most especially in the traffic, as well as those who patronise them.

The directive followed the death of a street hawker in Maryland area, who was crushed by a truck, while trying to escape arrest by the operatives of KAI, following which hoodlums destroyed about 49 BRT buses.

Speaking with Lagos Metro, the Public Affairs Officer (PAO) of the Task Force, Mr Taofiq Adebayo, said the agency’s operatives would definitely be out on the streets of Lagos today, to carry out the enforcement of law against street trading as directed by Governor Ambode.