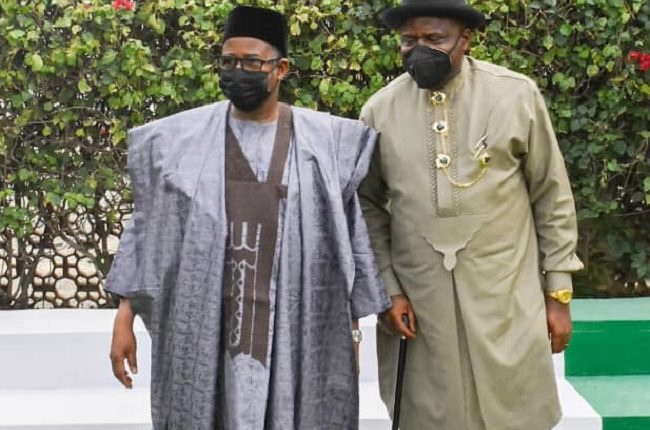 It has been observed that if the raging war of words ongoing between Bauchi and Benue States Governors, Sen Bala Mohammed Abdulkadir and Samuel Ortom responsibility is allowed to rage on, the country’s polity will be overheated and turn sore to be controlled.

The observation was made by the Governor of Bayelsa State, Douye Diri who called on the leadership of the People Democratic Party (PDP), to as a matter of urgency intervene in the conflict between the duo saying that the trade of words between the two PDP Governors was becoming disturbing and should not be allowed to escalate further.

Diri Douye stated this on Thursday when he led members of his entourage on a courtesy visit to Bala Mohammed at the Government House Bauchi, calling on the two PDP Governors to sheathe their swords and cease further actions and reactions in the interest of the unity and peace of the country.

The worried Bayelsa Governor said that, “Concerning the raging current issue between two brothers Governors of the same party. May I cease this opportunity to advice and call on both of you who are members of our great party cease further actions and reactions on the burning national security issues.I want to also use this opportunity to call on our party to immediately intervene and resolve whatever issues that are still yet unresolved amicably, as a party and brothers.”

He added that, “I am calling on the chairman of the PDP governor’s forum to also please immediately intervene and do not allow this conflict to grow beyond what we have already seen. It is very disturbing to read on the pages of the newspapers about two gentlemen who mean so well for their states, who are doing so well in their states to be engaged in this conflict on the pages of the newspapers and other media outlets.”

Diri Duoye, however, commended Governor Bala Mohammed over the laudable developmental projects executed in the state so far, saying that, “Bala Mohammed is a great man who is acknowledged by the people of Bayelsa State” .

While responding, the Bauchi State Governor, Bala Mohammed said that there is no disharmony between himself and the Governor of Benue State, Mr Samuel Ortom, pointing out that they were courageous enough to discuss a burning national issue which he will do everything within his powers to descalate in such a way that it will not bring injury to the party and national unity.

Bala Mohammed said that, “You know my pedigree and antecedents, I believe in the Nigeria unity, at a point, I felt Benue is also my state because I worked there in 1982 and when I was there,the former Governor made me his own son, I was dinning and eating in his house.Everybody that has Fulani background is considered and loved most than even an average Tiv man in Benue State.”

The Bauchi State Governor added that, “I was just lamenting that pre-modial cordiality relationship has been destroyed by suspicion and mistrust. I was not doing anything in any way to insult or to cause injury to my friend and brother that we have worked together at the cabinet and now as Governors.”

He concluded that, “Thank you for having the courage to tell us, it is time to stop. My response is just very mild on issue of criminalization of my humble self and I know my brother has a right of reply and he has done that, but let us not take this thing to a level where leadership will be demistified.”

The British Parliament at the Westminster Hall held a debate on ‘e-petition 554150, relating to Nigeria and the sanctions regime’ on Monday. The government of the United Kingdom has however responded…Stop war of words  Stop war of words

The surprise visit made on Friday night by the leaders of the ruling All Progressives Congress (APC) to former President Goodluck Jonathan at his residence in Abuja triggered a stir in the major political camps, resulting in at least four possible theories..Stop war of words  Stop war of words