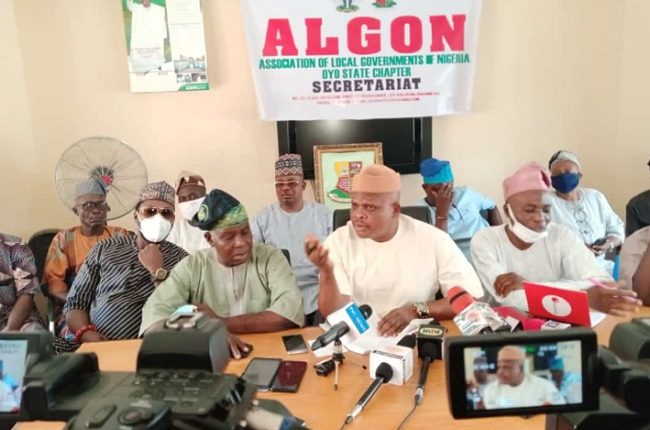 Pointing to the forthcoming May 7 Supreme court judgment on the case between ALGON and the Oyo State governor/Oyo State government, the sacked Chairmen warned that political parties and their candidates may be ‘investing’ in an election that may never hold.

Speaking through their Chairman, Ayodeji Abass-Aleshinloye, at ALGON Secretariat, Ibadan, on Monday, the contending Chairmen wondered why OYSIEC who is a party to subsisting litigation went ahead to publish a timetable for local government elections.

According to Abass-Aleshinloye, OYSIEC’s action pointed to a plan by the state government to either “buy off the judgment” or stage an “executive coup” against the Supreme court judgment if not favourable. He decried disregard for the rule of law by the Makinde led government noting that except the state government already knows what the Supreme court will rule, it should have waited for the May 7 judgment before proceeding with plans to conduct local government election.

“We advice political parties and candidates not to invest in OYSIEC electoral market process which will lead to nowhere if ALGON wins at the Supreme Court on May 7, 2021.

“Don’t be scammed. After May 7 judgement, the political climate will be clear to all and sundry and nobody will be scammed.

“APC will not participate in the election. We cannot be a party to illegality.

“On this point, we call on OYSIEC to stop the process of its scammed election; it’s illegal, presumptuous, wasteful and unnecessary.”

“A case is in Supreme Court for judgment on May 7 and OYSIEC, which is a party to the case, has gone ahead to fix May 15 to conduct another local government election.

“What if ALGON wins its case and the Supreme court restores our mandate with the specific pronouncement that the elected local government Chairmen and councillor return to the office and spend the remaining two years of their tenure?

“What will become of the huge financial resources running into billions of naira that OYSIEC would have wasted on a preelection jamboree for an election that may not hold by virtue of the judgment that may give victory to elected Chairmen and councillors?

“What would happen to candidates that OYSIEC collected money for a collection of forms from? This is apart from a multimillion naira state fund that will be allocated under the preparing for an election that may not hold if ALGON wins at the Supreme Court.

“The governor may be planning an executive coup against the Supreme Court judgment if it does not favour him by going ahead with the election after the judgment even if it doesn’t favour him and his government.

“He will encourage the handpicked elected Chairmen and councillors to go to court and obtain an injunction to challenge returned elected Chairmen on the basis of lapsed tenure in case Supreme Court does not make a declaratory judgment on the continuation of tenure.

“This will be another illegal step to return the state to another unnecessary legal crisis,” Aleshinloye said.

On February 27, 2020, Nigeria’s first index case of COVID-19 was confirmed in Lagos. This was the first reported case in Sub-Saharan Africa. An Italian, who had just returned from Milan, Italy on the 25th of February 2020, was confirmed by the Virology Laboratory of the Lagos University Teaching Hospital (LUTH), and managed at the Infectious Disease Hospital (IDH) in Yaba, Lagos…Stop illegal, presumptuous Oyo LG election process, Sacked chairmen tell OYSIEC