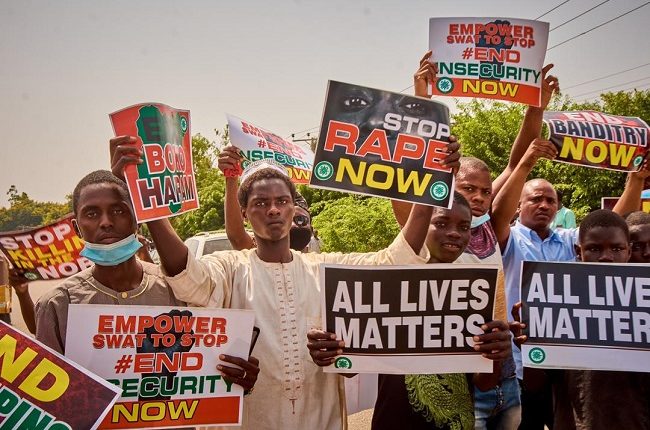 As the protests for Police reform in the country continues, Coalition of Northern Youths coordinated by the Northern Youth Assembly, on Thursday, protested in Bauchi calling for an end to brutality, criminality and other forms of insecurity in the country.

The youths in their hundreds under the aegis of Coalition of Northern Youths coordinated by the Northern Youth Assembly marched from the Abubakar Tafawa Balewa Stadium to the Government House through the major streets of Bauchi metropolis.

At Government House, the protesters were not allowed into the premises but stopped at the gate where they delivered their message declaring support only for complete Police reform in order to end all forms of insecurity in the country.

Spokesperson of the Coalition, Alkassim Nuhu, said that the concern of the Coalition is how to end insecurity in Nigeria in the form of kidnapping, armed robbery, terrorism, banditry and others issues that are retarding development in the country.

He added that the issue of insecurity is not limited to a particular section of the country saying that every Nigerian is worried about the situation and in support of reform and reorientation of the security apparatus of the country.

On the ongoing #EndSARS protest, he declared that “there is no need for the protest to continue considering that the SARS has been disbanded. We joined them in the protest and achieved the aim, why continue with protest endangering the lives of innocent youths.”

Alkassim Nuhu berated the call for the resignation of some political leaders on the country saying that it is not the solution to the problem of insecurity in the country but a complete reform.

On his own, National Speaker of the Northern Youth Assembly, Ukkasha Namza said that the #Endinsecurity protest will continue until the objective is achieved and security was assured to Nigerians.

As of the time of filing this report, no Government official came out to either receive the protesters or talk to them, while they were approaching the Government House, the Governor’s convoy drove out to IBB Square for the PDP mega rally.