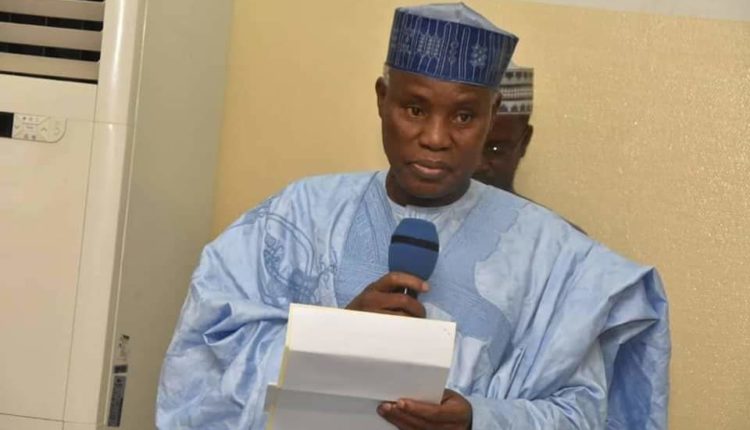 Minister of Defense, Major General Bashir Magashi has charged soldiers and officers to stop their defensive posture and take the war to the enemy.

General Bashir assured soldiers on the war front that the government is doing a lot to improve on their fighting prowess in terms of weapons and welfare.

He said that the federal government is not unmindful of the fact that some soldiers have paid the supreme price and was doing all they can to alleviate the suffering of their families.

The minister who visited the war front in Gubio on Sunday reminded the soldiers that the Army is their Professional calling and comradeship should remain their motor or watchword in prosecuting this asymmetric war.

“Without loyalty, nobody can command anybody. A lot has been achieved and we do not want to go backwards from our present level of achievements.

” I am here on behalf of the Commander-in-Chief, President Mohammadu Buhari to thank you for your services and to assure you of more support.

“Let me assure you that we are doing our best to alleviate the suffering of the people and that of the families of soldiers who have paid the supreme price.” He remarked.

In a dinner, Saturday evening, to welcome the minister on his three-day visit to the war theatre, Chief of Army Staff Lt General Tukur Buratai assured the troops that their welfare would be well taken care of.

Responding to the gesture of the dinner, the minister assured that he will ensure a closer relationship between all the arms of the military which he noted needs to work together to win the war.

He said that the Federal Government is in readiness to support the troops with all forms of equipment where there is a need or deep lacuna.

The highlight of his visit was a stopover to the special forces camp being built along Gubio road and the 7 division hospital where he interacted with inpatient officers and soldiers.