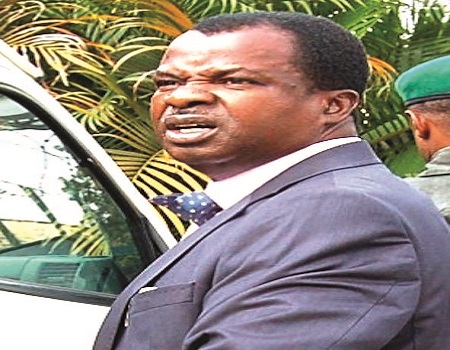 THE Hope Democratic Party (HDP) and its Presidential candidate, Chief Ambrose Albert Owuru have asked the Presidential Election Petition Tribunal to stop the planned swearing-in of President Muhammadu Buhari as President of the Federal Republic of Nigeria on May 29, 2019.

Owuru and his party had insisted that it will be unfair and unjust to swear Buhari in as President on the ground that validity of the election that produced is being challenged at the Tribunal.

The petitioners, in a motion on notice filed on May 9, 2019, prayed for an order of the Tribunal to stop the President from presenting himself for inauguration on May 29 or any other date until all petitions challenging his election have been fully settled.

Owuru and his party also prayed for another order stopping the acting Chief Justice of Nigeria (CJN), Justice Ibrahim Tanko Muhammad from inaugurating or administering the oath of office and oath of allegiance on Buhari until all court actions challenging his election are determined.

In the motion brought pursuant to Section 1, 6, 139, 239 of the 1999 constitution (as amended) and Section 26 and 138 of the Electoral Act 2010, HDP and its Presidential candidate, the two petitioners claimed that unless Buhari is stopped from been inaugurated, he will foist a state of hopelessness on the Tribunal.

In the motion signed by Mike Okoye, the two petitioners said that they are challenging the validity of Buhari’s election in grounds of non-compliance and violation of the provision of the electoral laws.

They further averred that a petition dated March 7, 2019, had been duly served on Buhari, the Independent National Electoral Commission (INEC) and the All Progressives Congress (APC) questioning the return of Buhari as the president-elect and that parties have exchanged pleadings.

The two petitioners claimed that, in spite of the pendency and scheduled hearing of their petition against Buhari’s election, Buhari has been making frantic efforts and preparations to be sworn in and inaugurated on May 29 by inviting the CJN and the general public.

They, therefore, insisted that restraining order by the Tribunal is appropriate to preserve the subject matter of their petition and prevent Buhari from foisting a fait accompli and state of hopelessness on the Tribunal and render their petition nugatory.

“The law is settled that once the question of the validity of the election of any person is challenged as to whether he is validly elected or not, that person is not competent to take office or assume the seat of power.

“The constitution of the federal republic of Nigeria prohibits and forbids that Nigeria or any part thereof be governed or taken over by any person or group of persons except in accordance with the provisions of the constitution, ” they averred.

However, when the matter came up on Tuesday, counsel to the petitioners, Oliver Eya sought to move the application but respondents in the matter claimed that they have not been served.

Buhari’s counsel, Chief Wole Olanipekun (SAN), INEC, Yunus Ustaz Usman (SAN) and that of APC, Lateef Fagbemi (SAN) told the Tribunal that they will need time to respond to the application when served.

President of the Court of Appeal, who is also the chairman of the five-member panel of the Tribunal, Justice Zainab Bulkachuwa, after hearing arguments from parties in the matter, fixed May 22, 2019, for hearing of the motion.

Meanwhile, Buhari, through his counsel, Whole Olanipekun has filed a motion praying the Tribunal to dismiss the petitioner of the Hope Democratic Party on the ground that it was not competent in law.

Olanipekun told the Tribunal that what the party is challenging in the petition is a referendum conducted on February 23, 2019, adding that in law, what INEC conducted was an election and not a referendum.

Justice Bulkachuwa, in a short ruling, announced that all applications in respect of the HDP petition will be heard on May 22.

HDP, in his petition, marked CS/PEPC/001/2019 had joined INEC and APC along with President Buhari as second and third respondents in the petition.