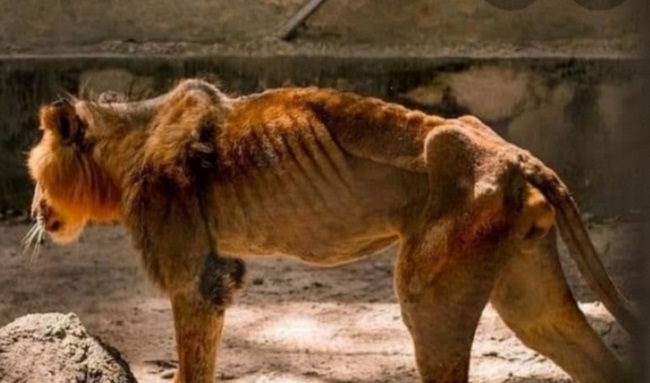 Four months ago around November 2020, there was widespread concern over the discovery of a starved lion in a zoo at Gamji creational Park Kaduna.

Recall that a visitor who went to the creational park to relax went to the zoo section only to find a starved lion on the verge of dying.

However, unknown to the workers of the park, the visitor secretly used his phone to take the footage of the starved lion and posted it on social media.

Accompanying the footage the visitor wrote, “I was so surprised. I felt so nervous and uneasy because it was my first time seeing a lion live. This is my first time in a zoo. I virtually saw them in movies, news and magazines. Actually, most of the animals in the zoo are not well-fed. They lack proper treatment or let me say-malnutrition,’’

It, however, drew the anger of Nigerians especially some charity organisations concerned about animals freedom.

At the peak of the revelations, findings revealed the management of the park hurriedly banned visitors from coming to the zoo.

It was gathered that the lion including the hyena, squirrel and crocodiles also found in the zoo were hurriedly evacuated to an unknown destination.

On Wednesday, when Tribune Online visited the park to find out whether the lion has recovered, a staff of the park who wouldn’t like to be mentioned disclosed that the lion has died two weeks after its footage went viral.

‘”Yes, I can confirm that the lion has passed on barely two weeks when its footage went viral.

“Some veterinary doctors came to take the lion for treatment later, they came with the shocking news that the lion has died as a result of some complications.

In the penultimate week, (March 7 – 13), there were 2,300 cases, a reduction when compared to the 2,817 recorded in the previous week’s (February 28 – March 6)…Starved lion in Kaduna zoo died two weeks after viral reports ― Official