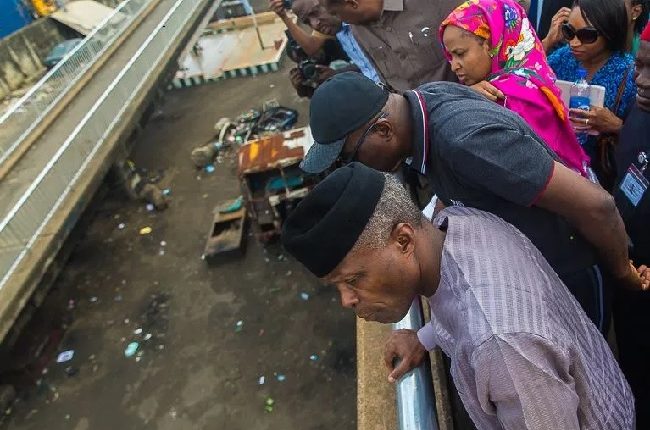 The Amalgamation of Container Trucks Owners Association of Nigeria (ACTOAN) and other stakeholders in Apapa have commended the Vice President Yemi Osinbajo-led Presidential Taskforce on Restoration of Law and Order, saying the timely intervention by the team had restored sanity to Apapa.

ACTOAN Chairman, Chief Olalaye Thompson, gave the commendation, while speaking on the development, said there was no traffic in Apapa anymore following the intervention of the taskforce team.

According to Thompson, the call-up system introduced by the Osinbajo-led team had been effective in the movement of trucks and other vehicles within Apapa, saying that the ongoing road constructions in Lagos metropolis and within Apapa environs was responsible for the recent slow pace of movement into Apapa.

“The current transportation challenges are due to ongoing construction works in and around Apapa. Construction works on the Third Mainland Bridge, Marine Bridge and Mile-2-Tin-Can axis are responsible for what appeared to be a slow pace of vehicular movement in Apapa.

“Most of the reports you see on Apapa are not the true reflection of the happenings. We don’t know those who are responsible for the campaign of calumny in the media. There is no traffic in Apapa except for the ongoing construction in and around Apapa.

“Construction work on Total Bridge (popularly known as the Marine Bridge) has forced over a thousand trucks to use one lane with other vehicles before they can access Apapa. Also, from Mile 2 to Apapa, there is no road currently due to massive ongoing construction which has also restricted movement on that axis. A couple of roads are also being repaired. There is no way, we won’t experience little hitches but it is not as bad as people painted it outside,” he said.

The Executive Vice Chairman of the Presidential Task team, Comrade Kayode Opeifa, insisted that there was no gridlock in Apapa as being speculated.

He said most of the roads within and around Apapa that were currently under construction were either abandoned or left in deplorable conditions by the previous administration, adding that Buhari-Osinbajo-led federal government awarded road construction projects as part of the moves to completely restore sanity in Apapa.

“People need to understand what is going on, not just sit down and read misleading news headlines.

“Is this not far better than what happened before? Is this situation not 100 per cent better at a point than what we used to experience? he queried.

“We need to understand what is going on. The federal government has shut the Third Mainland Bridge for repair, Marine Bridge is being repaired, an arm of Eko Bridge is also closed down for rehabilitation all within Apapa, and we have asked the trucks to use the same roads with tankers, other trucks and cars, so it is expected. These are non-recurrent, they will happen over the period these construction and rehabilitation are ongoing,” he said.