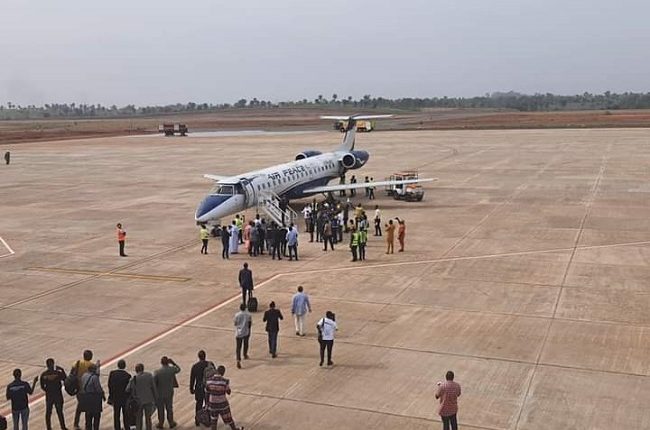 Stakeholders in Anambra State, have commended Governor Willie Obiano for the establishment of the international passenger/cargo airport 30 years after its creation.

The airport is located at Umueri community, in Anambra East Local Government Area of the State.

An Air Peace plane arrived at about 2:47pm on Tuesday with 35 passengers on board from Lagos State.

According to the stakeholders, mostly All Progressive Grand Alliance (APGA) chieftains who were present during the landing of the aircraft, the investment is an everlasting parting gift to Ndi Anambra by Governor Willie Obiano whose administration will expire on March 17, 2022.

Speaking to Nigerian Tribune at the airport, the lawmaker representing Njikoka two State Constituency, Honourable Pete Ibida, said that the airport will save Anambra State importers time and other constraints of going to other international airports to travel and transport their goods.

He disclosed that apart from improving the revenue profile of the state, the airport will go a long way in offering employment to the teeming youths across the three Senatorial Districts in the state.

He commended Obiano for fulfilling his promises to Ndi Anambra and called on the people to support the governor-elect, Professor Chukwuma Soludo, to continue with the legacy projects of the incumbent.

Contributing, the Deputy National President of National Youth Council of Nigeria (NYCN), Comrade Innocent Nduanya, described the Anambra Airport, as a major legacy project of the Obiano administration which he noted will bring Anambra State to the world map.