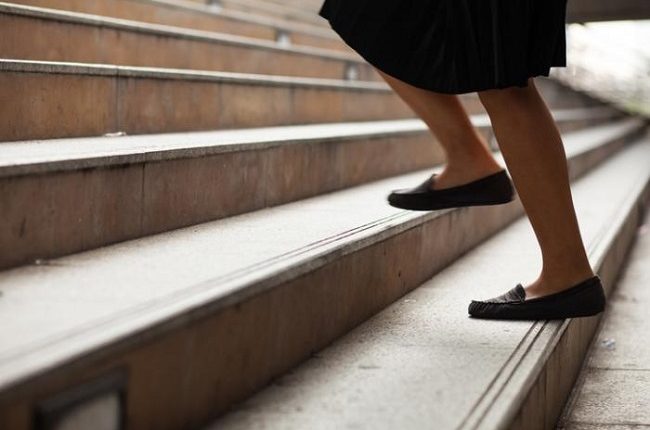 MODERATE-intensity stair walking for as little as three minutes can lower glucose and insulin concentrations, and 10 minutes of stair walking can improve insulin sensitivity, according to study findings.

“Short duration, moderate-intensity stair-stepping causes a decrease in peak postprandial glucose and insulin levels with as little as three minutes, but longer — 10 minutes — stepping was necessary to also increase in insulin sensitivity after a standard glucose challenge,” Jeff Moore, MS, professor at San Diego State University School of Exercise and Nutritional Science and a PhD student at the Lundquist Institute for Biomedical Innovation at Harbor-UCLA Medical Center, and colleagues wrote in a study published in Nutrition, Metabolism and Cardiovascular Diseases.

“This intervention had no effect on antioxidant capacity.”

Researchers recruited 30 healthy adults (60 per cent men; mean age, 26.2 years) from October 2016 to August 2017 to participate in a crossover trial at an exercise physiology laboratory at San Diego State University. Peak aerobic capacity was determined at the first visit, and a baseline resting oral glucose tolerance test was conducted at the second visit.

The next three visits included an OGTT combined with 1, 3 or 10 minutes of self-selected intensity stair climbing and descending. Participants self-selected a stepping pace between 90 and 110 steps per minute. A 75g dextrose solution was consumed at the start of the visit.

The researchers noted there were several limitations to the study, including a lack of time points, the use of dextrose rather than a mixed meal, and the study population consisting of only healthy younger adults.

“Future studies should investigate populations who have impaired glucose tolerance, insulin resistance, or overt diabetes who would be expected to see a greater benefit,” the researchers wrote.