Entertainment
By Tribune Online On Jun 26, 2019 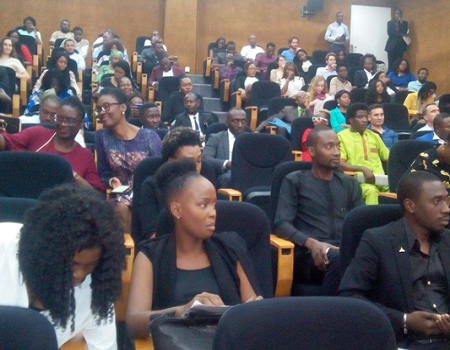 The stage play on the acclaimed memoir was presented by Jos Repertory Theatre, an organization that uses theatre as a tool for confronting and addressing societal issues.

The event was organized by the Embassy of Czech Republic in collaboration with Embassy of Brazil and Consumption by Moonlight as part of series of events to commemorate 30 years of Czech Democracy.

Marie Novotna, Cultural Officer of the Czech Embassy in Abuja, said the presentation was to remember the contributions of Havel towards restoring democratic rule to Czech.

“Vaclav Havel was from a very rich family, and was an intellectual who used his works to advocate a free and better society under the communists.”

Theatre lovers, heads of institutions, government functionaries and members of the diplomatic community gathered for the event, acclaimed to be the most popular literary work of Havel.

The plot of “Audience” deals with the travails of Havel’s alter-ego, Ferdinand Vanek, a distinguished intellectual who was forced to work in a brewery because his writings have been banned by Czechoslovak Communist regime.

Vanek was stuck in the bleak office of his boss and foreman of the brewery where he has been forced into menial labour.

His boss, an uneducated drunkard, always calls him to his office for endless repetition of dialogue, amidst consumption of gallons of beer.

The tiresome bureaucracy and constant fear under the communists have driven the foreman to alcoholism as he became prone to stint of rage and despair.

ALSO READ: ‘I was rascally as a youth’

Vanek, however, refuses to compromise his principles and mindset of his colleagues, in spite of the promise of promotion.

The play ends with the same conversation that it began with, ‘it is Vanek who sits in the foreman’s seat’, and vice versa.

Vaclav Havel was the last President of Czechoslovakia from 1989 until its dissolution in 1992, and then as the first President of the Czech Republic from 1993 to 2003.

He was a statesman and former dissident, and as a writer of Czech literature, was known in the literary world for his plays, essays, and memoirs.

His political activities brought him under the surveillance of the secret police and he spent multiple stints in prison, the longest being nearly four years, between 1979 and 1983.

Havel’s plays were banned from the theatre world in his own country, and he was unable to leave Czechoslovakia to see any foreign performance of his works.

Rap music is dead, boring, I don’t listen to it — Wizkid