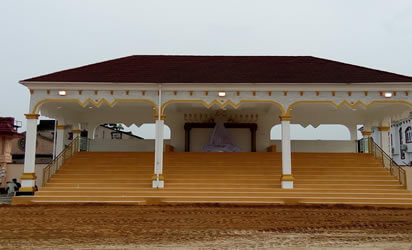 Former President Goodluck Jonathan, governors of Delta and Bayelsa states as well as other dignitaries are expected on Tuesday at Oporoza in Warri South West Local Government Area of Delta State for the presentation of staff of office to the Pere of Gbaramatu Kingdom, HRM Williams Naira Ogoba, Oboro II by Governor Ifeanyi Okowa.

This is just as acting secretary of Gbaramatu Traditional Council, Chief Godspower Gbenekama, said the people are sad because of the absence of former militant arrowhead, Chief Government Ekpemupolo otherwise known as Tompolo.

Tompolo has been on the run after being issued a warrant of arrest by a Lagos High Court over the controversy trailing the cost of the land he sold to the Federal Government for the establishment of the Maritime University at Okerenkoko.

He’s also believed to be the brain behind the ace militant group, Niger Delta Avengers (NDA), a claim he has consistently denied through his aides and lawyers.

Speaking on Tompolo’s absence at the kingdom at present and its implications, Chief Gbenekama said: “We feel very bad; as a young man who grew up with him, the man has done a lot the Gbaramatu kingdom, the Ijaw nation and Niger Delta as a whole.

His absence gives us a lot of concern, but what can we do? We leave that to the government to sort out.

They should sort this issue of Tompolo out.

If Tompolo is around, you’re sure the waterways are safe.

No criminal dares intrude into this place, but right now, the young man is not around and we’re not feeling very comfortable.

We know that one of these days, he’ll come back and make things better for our people, again, the Benemowei of Gbaramatu Kingdom noted.

He charged Governor Okowa to ensure safety in the waterways, before, during and after the ceremony of the presentation of staff of office to the traditional ruler.

He also urged natives of the kingdom, who fled in the wake of military siege a few months ago to return home.

Meanwhile, the visit by Nigerian Tribune to Gbaramatu Kingdom on Sunday, revealed that the palace of the Gbaramatu paramount ruler as well as the entire Oporoza community is wearing a new look.

The arcade where cultural dances from communities making up the kingdom is gorgeously facelifted and enamoured.

Other sundry works such as painting of the guests house, sand-filling among others are being carried out.

In addition, sons and daughters of the kingdom were arriving  in droves while the waterways are free of security threats with few Nigerian troops sighted at a jetty relating well with the natives.

Time for patriotic lullabies for Nigeria