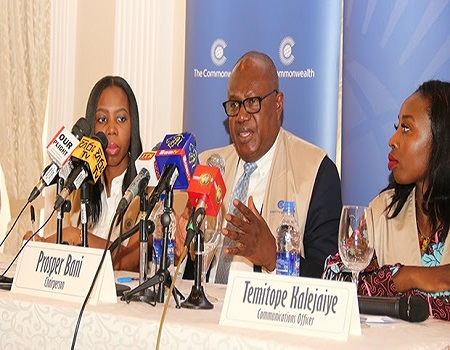 The Commonwealth Observer Group has commended the people of Sri Lanka on a largely peaceful, credible and orderly election, but expressed concern that some groups experienced fear and intimidation.

The Group stressed that a credible election must be inclusive, guaranteeing every citizen’s right to participate freely and safely in the process. The Group encouraged the people and leaders of Sri Lanka to improve on inclusivity in future elections.

Sri Lanka’s rich cultural and religious diversity should be celebrated and valued, they said, urging all political leaders to prioritise social cohesion and inclusion.

Presenting the Group’s preliminary statement at a press conference in Colombo, the Chair of the Observer Group, Prosper Bani, said: “While the environment before and during the poll was generally peaceful, we were concerned to hear about incidents of violence, in particular, an attack on a convoy of buses transporting Muslims to vote in the northern part of the country.

“We strongly condemn this and all other such incidents of intimidation and violence targeted at particular groups.”

Mr. Bani continued: “We were impressed by the confidence and professionalism of polling officials, a significant number of whom were women. We commend the inclusion of women throughout the administration of elections in Sri Lanka.

“I had the privilege of personally visiting the Election Commission’s headquarters in Colombo where I was shown the impressive teams, structures and mechanisms in place for receiving and addressing complaints, receiving the results from counting centres by fax (and by WhatsApp), and for results tabulation and dissemination to the media.”

Members of the Observer Group were deployed to six of Sri Lanka’s nine provinces, engaging with local stakeholders in Central, Eastern, North, North Central, Southern and Western Provinces of the country.

The Group’s final report will be submitted to the Commonwealth Secretary-General and subsequently made available to the Government of Sri Lanka, political parties, the Election Commission and the public.