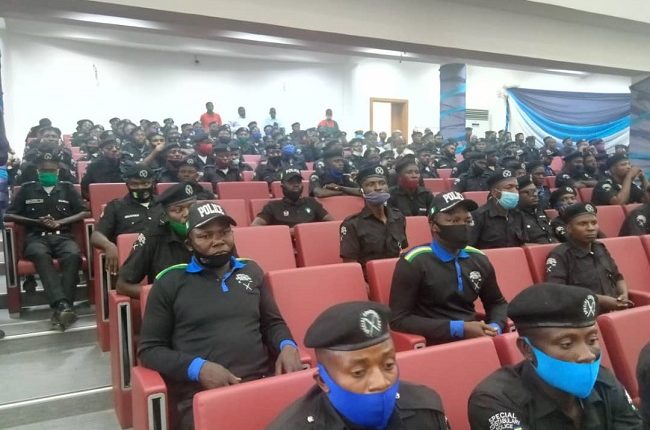 Youths recruited as Special Constabularies into the Nigeria Police Force to maintain security in local government areas of Kwara state on Saturday staged a peaceful protest over non-payment of 16 months salary owed them.

The special constables, who are about 1,056, took their protest to strategic areas of Ilorin, such as Challenge, Post Office and Ahmadu Bello Way, saying, “Kwara state government, pay us our salaries for 18 months”.

Some of the protesters, who dressed in black police uniform, covered their bodies with leaves as they marched along the streets, while they also caused the protest to go viral on social media.

Speaking on the development, the Police Public Relations Officer (PPRO), Okasanmi Ajayi, on behalf of the state Commissioner of Police, Tuesday Assayomo, said
that the concept of community policing and recruitment of special constabularies is voluntary in nature, “meaning they are not on monthly renumeration like the conventional policemen”.

The statement read: “Kwara State Police Command wishes to dissociates herself from a video already spiralling on facebook, regarding a protest by some purported policemen over non-payment of one year salary.

“It was surprising that the same set of constabularies after the meeting with agents of the state government could go online with a video claiming that the government was owing them salaries for a year.

“The commissioner of police Kwara State, CP Tuesday Assayomo psc (+) wishes to state categorically, that the police is not owing any policeman or woman any salary, neither is the police owing the special constabularies salary.

“Therefore, members of the public are advised to disregard the viral video as it was designed to embarrass the police and also to draw an undue sympathy from the public.

“The men and women of the special constabulary are at liberty to honorably disengage from the service if they so wish.”

When contacted for a reaction, the state Commissioner for Communication, Mr. Olabode Towoju, said that the police constables were to be taken care of by the local governments in the state.

“The constabularies are not directly being paid by the state government. They are being taken care of by the local governments which have been giving them their stipends.”