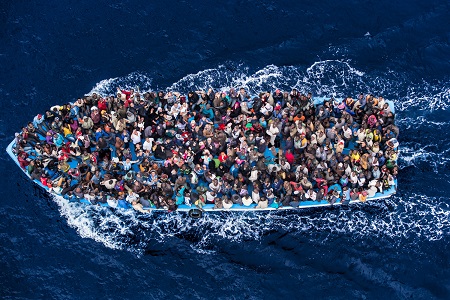 More than 200 migrants were rescued on Wednesday by the Spanish coastguard as they attempted to make the crossing from Africa to Spain, rescue services said on Thursday.

The rescue comes at a time when Spain is preparing for the arrival on a Spanish warship of 15 migrants from an Italian port following a prolonged standoff between Italian authorities and a Spanish-registered private rescue boat, Reuters reported.

On Thursday, the coastguard said the migrants from Sub-Saharan Africa were found in three rafts in the Alboran Sea, between northeastern Morocco and southeastern Spain on Wednesday afternoon.

They were taken to Almeria and Malaga, the coastguard added.

Some 18,018 migrants have arrived in Spain so far this year by mid-August, Interior Ministry data shows. This is a decrease of 39 percent from the same period last year.

United Nations data shows irregular sea arrivals from the Middle East and North Africa to EU dropped from over 1 million in 2015 to some 141,500 people last year while nearly 15,000 people are estimated to have died or gone missing in the perilous sea voyage.