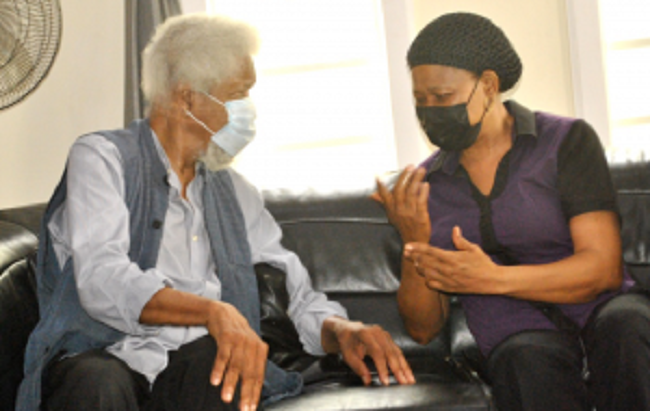 Nobel Laureate, Prof. Wole Soyinka, on Wednesday was at the Omole Lagos residence of the late spokesperson of the pan-Yoruba socio-political group, Afenifere, Mr. Yinka Odumakin, on a condolence visit, describing the deceased as a doughty fighter.

Soyinka, who arrived at Odumakin’s residence around afternoon, was received by the deceased’s wife, Dr. Joe Okei- Odumakin, who is president of a rights group, Women Arise Initiative (WAI).

While consoling the widow, Soyinka said that Yinka, the Afenifere spokesperson had always displayed uncommon courage.

The Nobel Laureate, while leaving after the visit, wrote in the condolence register: “Farewell to a doughty fighter.”

Others who also visited the Odumakins to pay their condolences include former deputy governor of Osun State, Senator Iyiola Omisore; the Founder of Trinity Church, Pastor Ituah Ighodalo and Senator Bamidele Opeyemi.

Ighodalo, in the condolence register, expressed his deepest sympathy to the family on the passing, describing the late Odumakin as a true compatriot, a committed fighter for freedom, praying that his seed is blessed.

“Yinka was a true compatriot, a committed fighter for freedom. May his seed be blessed, My deepest sympathy,” the cleric wrote.

In spite of the huge investment in the water sector by the government and international organisations, water scarcity has grown to become a perennial nightmare for residents of Abeokuta, the Ogun State capital. This report x-rays the lives and experiences of residents in getting clean, potable and affordable water amidst the surge of COVID-19 cases in the state…condolence visit to Odumakin’s widow  condolence visit to Odumakin’s widow

Unite for development of Ilorin ― Tafida of Ilorin

Do You Dream of Opening a Dispensary? This is what it takes