Sowore: We have no hand in attack on Adeyanju, others ― APC 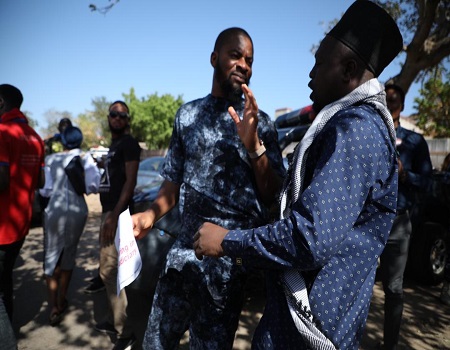 The ruling All Progressives Congress has said neither the party national secretariat nor the presidency instigated the attacks on a peaceful protest led by Deji Adeyanju at the Nigeria Human Rights Commission (NHRC) head office in Abuja on Monday.

Miscreants who claimed to be engaged in a similar action but in support of President Muhammadu Buhari swooped on the group led by Deji Adeyanju and physically assaulted him and others who had stormed the NHRC office.

But the APC national publicity scribe, Lanre Isa-Onilu condemned the attack and called for a full investigation by the government.

While it admitted that civil protest was lawful, the party warned politicians from using such avenue to put the government in a bad light.

The statement read in part:” Our attention has been drawn to a clash between members of the Peoples Democratic Party (PDP) and people believed to be pro-All Progressives Congress (APC) exercising their respective rights to protest at the Nigeria Human Rights Commission (NHRC) head office in Abuja on Monday.

”This incident stands condemned by our party. As the governing party, we recognise the inalienable rights of people, groups, including political parties to gather or carry out protest by themselves or through proxies within the ambit of the laws. We do not subscribe to a situation where such protests become chaotic or different protesting groups turn on one another, causing avoidable injuries. Such is clearly unacceptable to our laws and it is against the principled stance of our government.

”While we recognise the fundamental liberties of citizens to freely express their views through lawful means, we cannot as a government allow excesses and irresponsible acts. No group or individual has a right to torment the public or display any act of intolerance to other people’s views.

”We note with dismay the attempt by the PDP supporters who try to deceive the public by hiding under various names such as civil society groups, human rights activists, and constitutional lawyers, to link our government to a dastard act as witnessed on Monday.

”In the cinematic mind of these PDP elements, the APC upon sighting the protest on the television channels quickly scrambled counter-protesters armed with placards to the NHRC head office. How ridiculous!

”For the avoidance of doubt, the APC-led administration would continue to uphold civil liberties and expand the democratic space for every citizen of our dear country.

It is there for us all to see: there has been no incident of harassment, arrest, or intimidation of anyone or group despite the level of attacks, name-calling, personal insults, and even callous statements being directed at the person of President Muhammadu Buhari by the different PDP leaders and its hideous supporters. We are witnessing increasing cases of irresponsible and unrestrained verbal attacks on the Nigerian President by the opposition elements with no consequences. Evidently, President Buhari government has no doubt displayed an avowed commitment to civil liberties and promotion of democracy.

”We would reiterate the need for the various nebulous groups and pretentious individuals to realise that the 2019 elections have been won and lost. Masquerading as patriots and promoters of rule of law and democracy to paint the APC government in bad light amounts to an exercise in futility. The discerning public understands that this is a case of an opposition finding it difficult to accept the fact that the election period has ended.

”We, however, remind these charlatans that our government would never succumb to blackmail.

”At all times, national interest and security, within the limit of our law, would guide our actions. Whenever anyone or group stands in conflict with the laws or poses a threat to our national security, this administration would apply the laws.

As in the case of the unfortunate clash between protesters on Monday, while commending the Police for the prompt intervention of its men on ground, we call for thorough investigation of the incident to ensure adequate actions are taken against anyone found to have overstepped his bounds.”