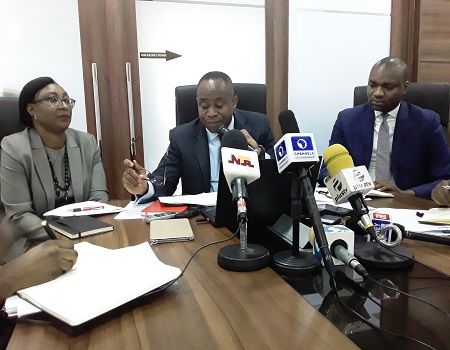 Managing Director of NSIA, Mr Uche Orji who briefed the press said: “the results show strong performance in a year when many international markets under-performed and the global economy experienced a moderate pace of expansion.”

According to him, despite concerns over international trade flows, slow growth in key economic indicators and increased volatility across financial markets, the Authority’s investment strategy proved robust with headline numbers maintaining a favourable trajectory across the three funds.

“Total income grew by 88.5 per cent, rising from N30.62 billion in 2017 to N57.73 billion in 2018. Considering the volatile global and generally challenging local investment environment, this performance reflects the strength and capability of Portfolio and risk management within the institution.

Giving a breakdown of how the three segments of the Fund, the NSIA boss explained that Stabilisation Fund has been fully deployed and made a return on investment (ROI) of 7.2 per cent; 81 per cent of Future Generations Fund has been deployed with 8.3 ROI; while Nigeria Infrastructure Fund of which 17 per cent have been deployed had ROI of 7.7 per cent.

Speaking on highlights of the activities for 2018, Orji said the Fund reached financial close on three healthcare projects including a Cancer Centre at Lagos University Teaching Hospital (LUTH) and Advanced Diagnostic Centres at Federal Medical Centre Umuahia (FMCU) and Aminu Kano Teaching Hospital (AKTH).
Already, the LUTH cancer Centre has been inaugurated in February while the facility will soon be fully open for clinical operations.

On the Presidential Fertiliser Initiative, he explained that output increased with approximately 12 million bags of fertiliser produced to date with a total of 18 blending plants participating.

For 2019, Orji disclosed that NSIA hopes to conclude the process of resuscitating Abuja Commodities Exchange (NCX); invest in basic chemicals with OCP Morocco, and construct a basic chemical platform to produce ammonia and other fertiliser products.