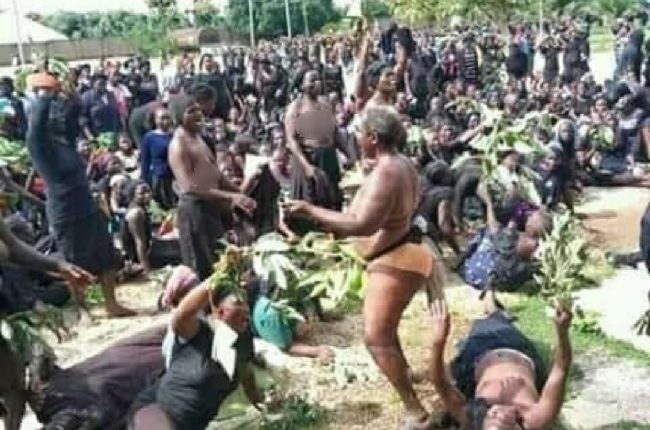 HUNDREDS of Atyap women stormed the palace of their paramount ruler at Atak Njei in Zango Kataf local government area of Kaduna state on Thursday to protest the incessant killings in the community by gunmen.

The women who wore black attires walked through the major streets in Zango to the palace carrying leaves and rolling on the ground to express their misgivings over the incessant killings going on in their area.

The aggrieved women were led to the palace, by some elderly women who were naked.

According to a protester who gave her name as Judith Simon, remarked that the women decided to go naked as a way of expressing their grievances over what was happening to them.

“Usually when women come out naked, it is a sign of bad omen. The leaders understand that. We are hopeful that the gods will be appeased in order for peace to be restored in the community.”

Simon argued further, “How can one explain the fact that we are under a 24-hour curfew, yet the killings are going on unhindered.”

ALSO READ: He wrecked my business, beat me with cutlass, sent me out of the house late in the night —Wife

At the palace, the woman leader whose identity was concealed told the paramount ruler, Sir Dominic Gambo Yahaya, that the killings were enough.

According to her, many women were turned to widows and their children into orphans, she said, “We can no longer farm because of the insecurity in our area.

“Hunger is looming and people are gradually leaving their ancestral homes.

Going For 2023 Without Restructuring Will Spell Doom For Nigeria, Yoruba Leaders Warn
Yoruba Summit Group (YSG), comprising Yoruba leaders drawn from different spheres of life, on Thursday said there was an urgent need to restructure the country now, warning that any attempt to go ahead with elections in 2023 without addressing the issue would spell doom for Nigeria… Read Full Story
hungerKadunaKillingsprotestwomen
Share

My baby has two genitals

Trump mocks Portland mayor who was gassed by federal troops