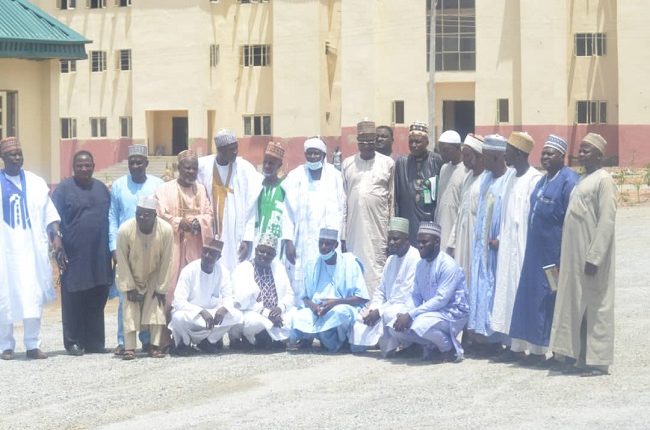 The Council of Ulamas, Southern Kaduna chapter has appealed to the founder of the first private university in Southern Kaduna (NOK University) to consider Muslims in her admission and recruitment processes when the University takes off.

This was as it maintained that the establishment of the University is a unifying factor which will lead to a lasting peaceful co-coexistence amongst its residents.

The Chairman of the Council who doubles as Chief Imam, Kafanchan Central Mosque, Muhammad Kassim stated this when he led a delegation of Ulamas in the area on a courtesy visit to the Founder, Chief Anthony Hassan in Kachia on Monday.

He said the University, which will be the first in the Zone and fourth in the Northwestern region of Nigeria will be an avenue for interaction and creation of a bond between Muslim and Christan youths.

The Islamic cleric mentioned that the initiative by Chief Anthony is highly commendable as it will give many youths the opportunity to get educated.

Imam Kassim, however, pleaded with the founder to consider Muslims during recruitment, admissions and issuing of contracts to give them a sense of belonging.

“We have many philanthropists in Southern Kaduna but none have taught of initiating such beautiful edifice for our people to benefit from.

‘ Outsiders are reluctant to come to this part of Kaduna to invest, but with this Institution, the impression about Southern Kaduna will change”.

“Aside from building this Institution, Mr Anthony is known for assisting people irrespective of their tribe or religion, hence, our assurance that he is God’s blessing to our community as a peacemaker and we will continue to pray for him to succeed in all his endeavours”.

He also called on residents of the zone to make the best of the ongoing peaceful reconciliation process so that they can enjoy more investments and developmental projects by individuals and government.

In his response, the Founder, of the University, Chief Anthony Hassana appreciated their visit and said the idea behind building the Institution was to provide education for the youths especially as public Universities cannot accommodate everyone these days.

The Founder said it was also necessary to provide job opportunities because unemployment and idleness are the major reason youths are used as thugs to cause crisis particular in Southern Kaduna.

He assured that, after the University project is concluded, he intends to identify youths and empower them with different skills so that they can in return, employ others too. “This will go a long way in addressing the crisis in the zone”.

“I have also encouraged many people to embrace peace. To ensure peace is sustained, I have personally sponsored the building of mosques and churches across Kaduna. I don’t believe in segregation at all”, he stressed.

He added that Muslims are already part of the contractors and will be considered for admissions too. “We already have Muslims as members of the board of trustees of the University and the master plan has provision for Church and Mosque.

The proposed University which is awaiting NUC approval will have faculties of Engineering, medicine and environmental sciences.