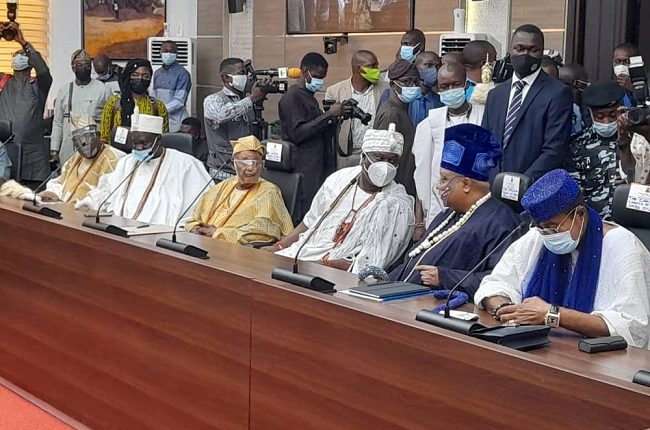 To curtail open grazing and its attendant consequences, governors of the Southwest geopolitical zone of the country have advanced the need for both state governments and the Federal Government to support cattle breeding.

The support, according to the governors, could come in the form of government establishing designated grazing areas, setting up feeding mills among others.

The chairman, Southwest governors forum, Arakunrin Rotimi Akeredolu, stated this while briefing journalists on the outcome of the meeting of governors, traditional rulers and security chiefs, held at Oyo state governor’s office, Ibadan, on Saturday.

In sum, Akeredolu said government at the various levels must devise ways to change the practice of open grazing by cattle breeders.

“But, things that will lead to open grazing in these modern times must be looked at and the state and federal government, in particular, should give support as much as we can to cattle breeders.”

Chief of Staff to President Muhammadu Buhari, Ibrahim Gambari; Inspector General of Police, Muhammed Adamu and the Director-General of State Service, Yussuf Bichi, who were expected at the meeting, were absent.

Their absence was attributed to bad weather which disallowed them from being able to board their flight from Abuja to Ibadan for the meeting.

Speaking further on discussions at the meeting, Akeredolu pointed to concerns about the continued influx of foreign herdsmen, unchecked, into the country owing to the nation’s porous borders.

Noting the tendency for foreign herders to be behind invasion of farms and clashes with farmers, the meeting held that there was need to tighten the nation’s borders.

Akeredolu added, “We all agreed that our borders have become too porous and that we need to do something urgently to prevent foreign herdsmen from coming into this country without any form of caution because a number of them have come in with their herds and what they do is of concern to us. “We all believe that our borders need to be checked and we need to tighten our borders so that all those foreigners from Niger republic and those beyond bordering states don’t come in with their herds and destroy our farms.”

On forest management, the Ondo governor said the Southwest governors aligned with the decision of the National Economic Council (NEC) that states should manage and preserve their forests.

“We all agreed that the time is now that we support the decision of National Economic Council (NEC) about forest management and that they believe that all the states should be in a position to manage their forest and that will give enough room for you to determine who is there, what purpose are they serving, and where you have people illegally.

“The state should be able to take some steps so that you can preserve our forest,” Akeredolu added.

How EFCC Chairman-designate, Bawa, others were secretly promoted