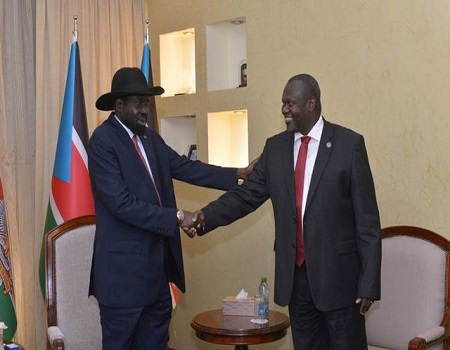 The two old rivals, who have been bickering for months, have overseen a conflict that has left at least 380,000 dead and forced four million from their homes.

“We have agreed to form the government in two days on 22nd February. We are still discussing on other things and I am hopeful we will resolve them all,” Machar said after meeting Kiir.

The president confirmed that they had agreed to a joint government for the third time since independence in 2011 – an experiment which has ended in disaster twice before.

“These are changes which will bring peace.”

The formation of a unity government was the cornerstone of a September 2018 peace deal.

But it has been delayed twice by failure to move forward on crucial issues such as forming a unified army, carving out state borders and creating a protection force to assure Machar’s security.

Kiir said his forces would be in charge of Machar’s protection and of security in Juba.

“I have taken the responsibility of protection, as the unified forces are still under training,” he said.

He urged some 190,000 people living under United Nations protection in tent cities across the nation “to come out, because the dawn of peace has come”.

Machar was sacked as vice-president in 2013 and later accused of plotting a coup against Kiir, kickstarting a civil war characterised by violence, rape and UN warnings of ethnic cleansing.

A 2015 peace deal brought Machar back as vice-president and he returned to Juba with heavy security.

When the deal fell apart in July 2016, the capital was plunged into a brutal battle between their rival armies and Machar was forced to flee on foot.

The ensuing war drew in new parts of the country and other local grievances and disputes came to the fore.

Experts have warned against rushing into a new unity government before all the outstanding issues are resolved, saying it could lead to disaster once again.

Ragged bands of war-weary troops from both sides have been brought together in camps but formal training of a planned 83,000-strong army has yet to begin and soldiers are cooped up without adequate food and water, an AFP visit to one such site showed this month.

The other key issue has been the number of states – highly sensitive because it affects the control of key resources such as oil.

Kiir this month said he would compromise by cutting the current 32 regional states to 10 – but Machar resisted the addition of three “administrative areas”.

Even if the unity government is formed, a UN report released on Thursday highlighted some massive challenges.

A three-member commission looked into rights abuses from the signing of a peace deal in September 2018 to December 2019 and delivered a damning indictment of “predatory and unaccountable elites”.

The commission said these elites had gone so far as to “deliberately starve” civilians in pursuit of their war.

Other issues included the continued use of child soldiers by both sides, bloody localised conflicts, sexual violence and plunder of public funds – all of which continued unhindered by the latest peace process.

“The Commission notes with grave concern that beyond climate-induced factors, both government forces and armed groups have pursued policies responsible for the starvation of the population in Wau and Unity State,” said the commission, referring to areas in the north of the country.

Meanwhile, corruption had robbed the state of precious resources and “made several officials extremely wealthy at the expense of millions of starving civilians”, said the report, which found millions of dollars in tax collections had been diverted and disappeared.