Latest NewsTop News
By Egbo Grace-Abakaliki On May 27, 2020 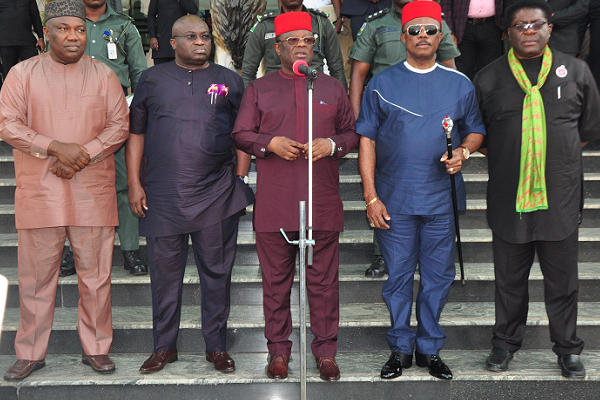 Governors of the South-East states have said they have ended their rift with the Inspector General of Police, Mohammed Adamu, over the modalities for community policing in the geographical zone.

Ebonyi State governor and Chairman of South-East Governors Forum, David Umahi, made this known to newsmen in Abakaliki, the Ebonyi State capital, after a virtual meeting of the governors with Mr Adamu on Wednesday.

Umahi, who said the IG agreed with the position of the governors that the various security apparatus already in existence at the local government and community levels be included in the new scheme, blamed the Commissioners of Police in the region for the disagreement.

Umahi said: “The meeting was based on the communiqué we issued after our Sunday meeting of the governors.

“We saw that the idea would assist us and so when the CPs made a mistake by going to do the composition by themselves and asked the governors to inaugurate, we felt that something was wrong somewhere and we had to contact the IG.

“Today, we met again, discussed and reached an agreement.”

“The membership includes all the DPOs and heads of other security agencies, the traditional rulers in each local government and other stakeholders.”

“This is what we have agreed and we also agreed that the states will implement theirs and inaugurate in their various states. When next we meet at Enugu, we will harmonise our views in line with these agreements we reached,” he said.

The governors, according to Mr Umahi, also agreed that each state should pass a similar law which will be called southeast security law based on the guidelines agreed at the meeting.

He noted that the governors charged the five state Houses of Assembly in the region to commence enactment of state security laws that will give legal backing to the establishment of a regional security outfit in line with its joint security programme for the zone.

COVID-19: Those with virus won’t be evacuated ― Foreign Affairs Minister