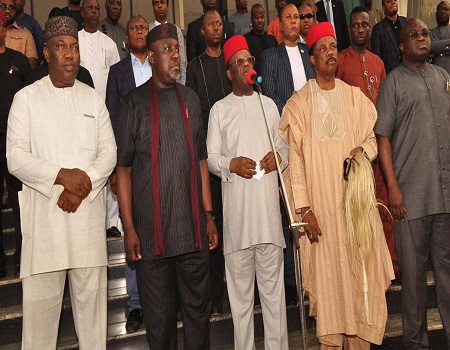 GOVERNORS of South-East geopolitical zone in conjunction with Ohanaeze Ndigbo, have agreed to set up a Stabilization Fund for the development of Igbo land.

In a statement by Chief Emeka Attamah, Senior Adviser to the President-General of Ohanaeze Ndigbo on Media/Publicity, Chief John Nwodo, on Monday, explained, “the Fund known as Alaigbo Stabilization Fund is intended to develop Igbo land to the status of Catalonia in Spain and Bayern in Germany”

Attamah further said that a 50-man steering committee made up of experts and professionals in banking, finance and development economics drawn from the diaspora and all the South-East states had been set up to draft the basis of Alaigbo Stabilization Fund and its governance protocol.

According to him, the Committee has as its Chairman a renowned economist and development expert, and former Economic Adviser to ex-President Olusegun Obasanjo, Professor Osita Ogbu, while Anyim Ude, will serve as its Secretary.

Chief Nwodo said that the Fund would drive investment in the South East such that every Igbo investor or entrepreneur would want to take advantage of the incentives it would provide.

He said that members of the Committee were carefully chosen based on their individual learning, competence and exposure.

COVID-19 Palliatives: We are yet to feel impact in South-East ­― Ohanaeze tells…