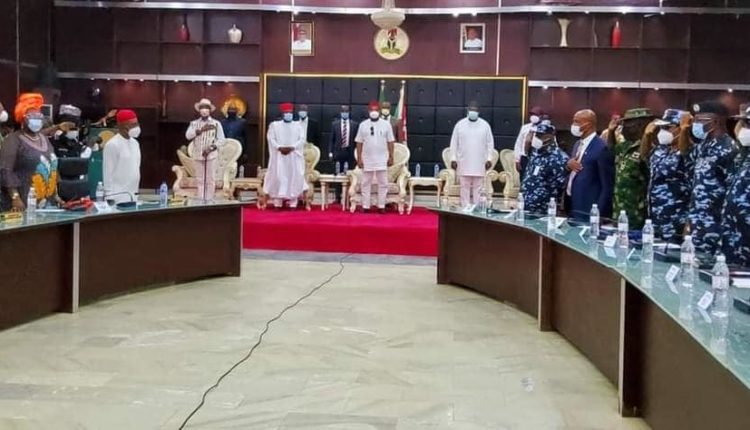 Governors of the South-East states have resolved to form a joint security outfit for the region codenamed ‘Ebube Agu.’

This was part of the resolution of the governors and heads of security agencies at a South-East security summit held in Owerri, Imo State, on Sunday.

As contained in a communiqué issued at the end of the meeting, Enugu State is to serve as headquarters of the outfit which will also coordinate the vigilante of the South-East region.

To coordinate and monitor implementation of the South-East Joint Security outfit, the summit resolved that a committee made up of security personnel, government officials and relevant stakeholders will be set up.

Notwithstanding the outfit, the five South-East states affirmed aligning with the Federal Government on tackling security issues in the country and fighting as one united zone to flush out terrorists and bandits.

The summit asserted the need to galvanise all stakeholders in the South-East, the political class, business community, bureaucrats and the intelligentsia to ensure total success in the fight against criminality in the zone.

At the meeting, the heads of all the security agencies expressed resolve to exchange intelligence in a seamless, effective new order to checkmate crime in the zone.

Head of security agencies were however mandated to come up with a comprehensive list of their logistics and material needs that will enhance their fight against criminality.

The meeting condemned the burning of police stations, attacks on correctional centres accompanied by release of inmates, killing of security personnel, natives, farmers and herdsmen, in the zone, recently.

The governors, however, requested the acting Inspector General of Police, Usman Alkali Baba, to stop the influx of IGP monitoring units but to allow state commissioners of police and state and zonal commands to handle their cases.

The meeting also approved that he acting IGP and other security chiefs to invite the leadership of Ohanaeze Ndigbo and Christian Association of Nigeria (CAN) to find out the reasons for increasing insecurity of the South-East.

In addition, the meeting agreed that military policing in the South-East should be adequately funded and become effective.

Furthermore, the meeting mandated security agencies to implement the ban on open grazing, while it called for peaceful coexistence of farmers and herders.

June 12 election was annulled due to ‘bad belle’, says Obasanjo