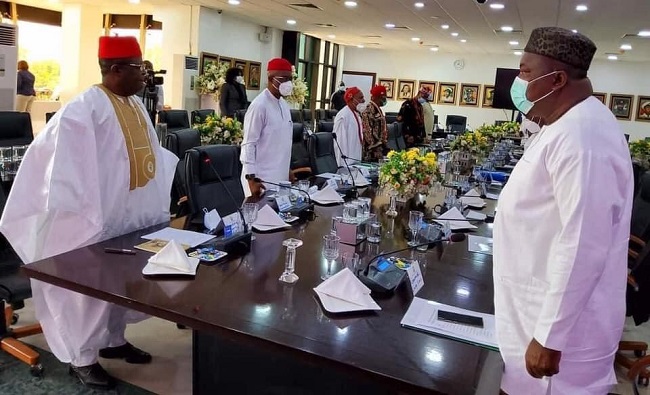 Governors of the South-East and opinion leaders in the zone are currently in a closed-door security meeting at the Government House, Enugu State.

The News Agency of Nigeria (NAN) reports that leaders of religious groups, traditional and socio-cultural institutions in the area are also part of the meeting.

This is the second security meeting called at the instance of the South-East Governor’s Forum in the last two weeks and might not be unconnected to the worsening security situation in the area.

Recall that in the latest security breach in the region, hoodlums on Saturday attacked the country home of Imo governor, Sen Hope Uzodinma, in Omuma, Orlu, during which part of the building and some vehicles were burnt down.

NAN further reports that the governors of the South-East had during a similar meeting held in Owerri on April 11 floated a joint security outfit code-named ‘Ebube Agu’.

At about 25 minutes, the train slowed down at the uncompleted Omi-Adio terminal, a village on the Abeokuta/Ibadan expressway; it’s a stone throw from Apata in Ibadan. Conveyance of passengers from there and other terminals has not kickstarted as the terminals are still under construction and workers were found there…South-East governors, opinion leaders in closed-door meeting in Enugu over insecurity

APC will take over South-South in 2023, Omo Agege vows