Sorghum can reduce need for blood transfusion, surgical deferment by 15% 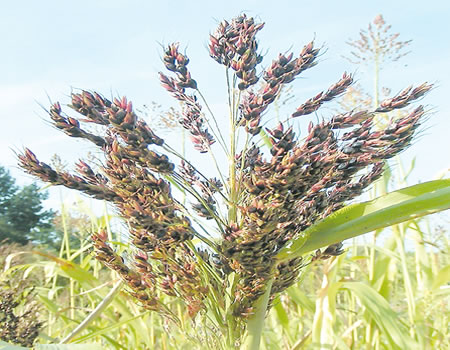 Blood transfusion and surgery postponement can be avoided in an additional 15 per cent of patients due to sorghum bicolour, experts have said.

In a new study, experts at the Lagos State University College of Medicine University (LASUTH) said sorghum bicolor is effective in treating iron-deficiency anaemia and could serve as an alternative to erythropoietin injections, especially in resource-poor countries.

Erythropoietin injection is a growth factor that is used to stimulate the production of red blood cells in the body.

The expert assessed the efficacy of sorghum bicolor extract in building the blood levels in 66 women between the ages of 19 and 55 years that were slated for fibroid surgery in a month’s time.

Anaemia is a condition in which the blood has a lower than normal number of red blood cells. In patients presenting for elective or planned surgery, anaemia is associated with increased ill health, need for blood transfusion, and delay of surgery.

Sorghum bicolor, commonly called sorghum and also known as great millet, okababa in Yoruba, jero/dawa in Hausa, is used for food, both for animals and humans, and for ethanol production.

Over a three-week period, the first group of women received folic acid, iron tablet three times daily, and extract of sorghum bicolour while the control group had same doses of folic acid and iron, only.

Blood samples were taken at the beginning of the test and afterwards weekly to access their full blood cell count and liver and kidney function tests. They were women free of tuberculosis, HIV, hepatitis, and sickle cell anaemia.

The researchers found a significant higher blood levels in women that had folic acid, iron tablets and sorghum bicolor extract compared with what was obtained in women taking folic acid and iron tablets only.

Among the participants in the control group, 75 per cent had an increase in percentage of red blood cells (RBC’s) in the blood, whereas only 40 per cent could attain the recommended percentage of RBC’s in the blood of 36 per cent for surgery.

Additionally, 15 per cent of selected patients, therefore, would benefit from the addition of the sorghum bicolor extract to their haematinics (folic acid and iron) thus avoiding blood transfusion, postponement of surgery, or erythropoietin injections.

There were highly significant increases in percentage of RBC’s in the blood, haemoglobin (the protein in red cells responsible for carrying oxygen throughout the body) concentration, and red blood cell count in the test group, whereas only the haemoglobin concentration was significantly increased in the control group.

Also Read:  Drug use in pregnancy: what’s safe, what’s not

Since, sorghum bicolour supports the body in red blood cell production, in the absence of iron taken as tablets, they inferred that the participants receiving sorghum bicolor extract would have had a greater increase in RBC indices if they had received more iron supplement because more RBCs would have been produced.

In the 2017 edition of the journal, Nutrition, the researchers concluded, “Although the difference is not statistically significant, the extract will correct preoperative anaemia in an additional 15 per cent of the patients.”

Previously, researchers at the University of Uyo had mentioned lemon grass’s ability to boost red blood cells production in the body, thus its potential use in prevention and treatment of anaemia.

They assessed the effects of lemon grass tea on parameters of blood such as packed cell volume (PCV) and red blood cell (RBC) count in 105 individuals (55 men and 50 women) aged 18 to 35 years for 30days.

The researchers according to the 2015 Journal of Medicinal Food said lemon grass tea appears to boost blood levels due to some of its nutritional constituents and its antioxidant and pharmacologic properties.

For instance, its high content in iron, which is essential for the synthesis of haemoglobin, makes lemon grass helpful for various types of anaemia, especially those resulting from iron deficiency.

Causes of painful s3x in women