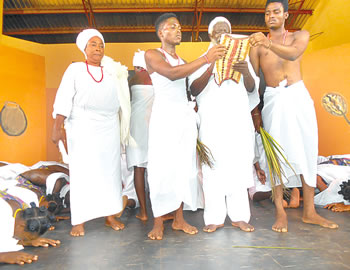 IT was a day of dance, songs and drama as the Department of Performing Arts of the Olabisi Onabanjo University (OOU), Ago Iwoye, Ogun State, last week, inducted its new set of students in the theatre profession.

As it is the practice in departments of theatre in institutions across the country, new theatre students must be ‘baptised’ before they can begin to perform on stage, and according to the Head of Department (HOD) of Performing Arts of the institution, Professor Bode Sowande, “the whole idea of the induction of the first year students is to introduce the students to the dos and don’ts of the theatre profession.

“In short, the induction is a dramatised ceremony to welcome the new students, and through this, they will be made familiar with the code of conduct guiding the profession, but the performance centres mainly on cultural displays.

“This is also a process that will first open the student’s eyes to how it is to perform on stage in the presence of audience; this induction is definitely their first time of performing before the audience on stage, and it is a whole new experience for them.

“We ought to have done this induction earlier, but due to some circumstances, we are just having it now, but it will definitely expose the students to how the theatre works,” Professor Sowande, who is also a dramatist and playwright, said.

As soon as the stage opened, senior students of the department, filed in on stage, all clad in white, to perform the opening prayer. Like a scene when Ifa adherents offer prayers to Orunmila, the students prayed for the success of the event, as well as for the new entrants who are being inducted into the theatre profession.

After the opening prayer, the new entrants filed in on stage, and for the next three hours, they took the audience on a journey of songs, dances and drama.

Most of the songs are indigenous songs from different parts of the country, with most of them preaching the need for Nigerians to unite. They also sang of their love for the theatre profession.

The highlight of the performance was when professional theatre artistes, Chief Jimoh Aliu and Madam Ronke Odukanmi, emerged to administer the oath of the profession on the students.

To say the audience was held spellbound by the performance is an understatement, as the inductees moved from one song and dance to the other effortlessly. They definitely must have spent a lot of time on stage, practising all the dance moves, and speaking on this, the staff adviser for the Performing Arts Students’ Association (PASA), Mrs Oluwakemi Odule, admitted that it took the effort of the lecturers to achieve the excellent performance given by the students this year.

“The induction is an annual programme by the department to welcome new students into the theatre profession; this also takes place in other institutions that have theatre departments.

“The main essence of the induction is, therefore, to introduce the students to the world of the theatre; the induction used to be called initiation, but due to the negative meaning people read to the word ‘initiation,’ we changed it to induction.

“So what we are just doing in essence is to teach them the ethics and norms of the theatre profession, and this will make them stand as theatre and cultural ambassadors in the university community.

The chairperson for the 2016 Performing Arts induction committee,  Wuraola Ijegbai, admitted that “it actually took us a while before we were able to put the performance together, but the excellent display revealed how much work we put into organising the induction.

“Everybody gave his best, and we can see the response of the audience to the performance; I am happy that we have been able to successfully introduce the students to the world of theatre through their induction,” Ijegbai said.

It was, however, not all cultural displays, as there were also hip hop performances, comedy shows, drumming performances, among others.

How Niger is producing teenage authors