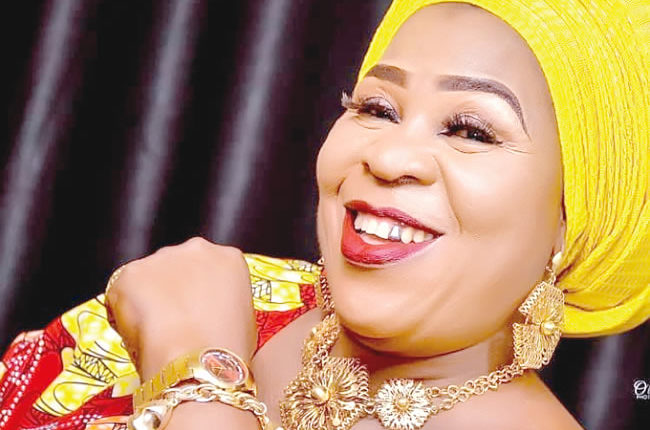 Popularly known as Madam Saje or Saje Tiologa among lovers of Yoruba movies, Nollywood actress and wife of veteran actor, Rafiu Balogun, Fausat Balogun has been in the movie industry for over 40 years and has become a household name in the Nigeria movie industry. In this interview by FEMI OGUNTAYO, she explains why she joined the recent EndSARS protests in the country and also talks about some of her career experiences. EXCERPTS:

What is new with Madam Saje?

I have just launched my personal YouTube channel and I named it ‘Sajetiologa TV’ and just like everyone knows, I have just signed ambassadorial deal with an estate management company and other brands too. I am grateful to God about that.

It’s been a long time coming; we would like to hear from the horse’s mouth, how did your journey to becoming a star actress start?

Yes, it’s been a very long time coming, but all thanks to God for where we are today. I started acting when I finished from primary school. I started acting in 1975. At the initial stage of my acting career, my parents never supported me, especially my father. He was against acting. He would come to beat me out of wherever I went for rehearsals then, he would beat the hell out of me. But later, when it got the stage where I was featured in stage plays which were shown on NTA television, he had no choice than to call me and said, if that was what I wanted, then so be it.

He said there were people like Ogunde and the likes, who were doing well in theatre around that time, so he started supporting my acting career. That was how my career in acting took off and people started noticing me. They called me several names, like Abeni and Iyawo Ojo. Later, I joined Lagos Television (LTV 8). Then it was not called LTV 8, that was when it was located at the new Art and Culture building, in 1980. So, my husband and I were with LTV 8 during that period. That was when we shot movies like ‘Abeni Ajagun’; Olowo Moju Ore was our producer then at Oshodi. When I did a show with Baba Suwe at NTA 7 called ‘Erin Kee kee’ in 1991. That was where I got the name ‘Madam Saje’ and God blessed the works of my hands.

What would you regard as the big break for you, which you could say brought you the fame you were longing for?

I cannot really say one particular movie gave me the fame, because the fame has been there since the days of NTA and LTV 8, during the time of stage plays, where I got the name Abeni and Madam Saje. Even though I cannot deny the fact that the present day home videos also gave me more fame, there are a lot of movies I can say brought me out there, many of them. There is no movie I featured in that did not give me a push. I have featured in movies by Jide Kosoko, Oga Bello, Iya Rainbow, Olaiya Igwe, Mr. Latin, and even Odunlade Adekola and all these movies brought me more fame. In fact, till tomorrow, people still call me, ‘Mama Odunlade’. I also played the role of Sanyeri’s mother in his popular movie ‘Opa kan’. So, I have featured in several movies which have made me more famous and are still giving me fame.

There was a time people took you for Saheed Balogun’s mum, how did you feel when you heard?

Well, on one hand, I am Saheed’s mum, because I know Saheed very well. I know his family and relatives, but it is just a coincidence that we both bear the same surname ‘Balogun’. Balogun is my husband’s name. I knew when Saheed came and said he wanted to start acting; I was the one who told him to face his studies first and he always acknowledged that. He went and studied at the University of Ilorin and when he came back into the industry, God helped him and he became widely accepted.

In a recent interview, you said you couldn’t complete your education because of your passion for acting, do you at any time regret this?

Any challenge one faces in life, if God blesses you with it, then one should just thank God for it. It is not like I do not regret not completing my education, which is why I have decided that all my children must complete their education up to the university level before any other thing. So, I do not have any regret, because I do tell people that work with me that, I do not have a formal education doesn’t mean I am not enlightened or lack native intelligence. The only time I could say I always have the regret are times when the English section of the Nollywood would want me to feature in their movies, but because I know my capability when it comes to acting in English, I always declined those offers. I thank God, even in the Yoruba sector where I am, I can say, I am doing great.

You eldest son is a director while your youngest daughter is also an actress, how do you feel about this and do you think your career had an influence on their choices of career also?

Well, I never knew my first son would like to join this profession because he studied Accounting in the university. Even when he was a child and because my husband and I are in this acting profession, we would want to use him for a child’s role, he didn’t like it, he never showed interest and we would have to look for another child to use. So, when he finished his degree programme and told me he wanted to learn movie directing, I told him he had to go learn, so I introduced him to some directors who could train him and now he is doing great in it too.

During the peak of the EndSARS protests, you also lent your voice against police brutality, why?

I just felt it was necessary we supported the youths in the agitation. Don’t let us deceive ourselves; what the youths were clamouring for was genuine. So, as a public figure, it was necessary for me to support the youths, because these youths are our fans and they are the ones who watch our movies.

You were seen with a placard with the caption, “We are filmmakers not criminals”. Have you ever been a victim of police brutality too?

I have never been a victim of police brutality or harassment in any form. You know as an elderly person and a public figure, when they see me they show me respect. Some of them would even ask to take pictures with me anytime I come across them at check-points and I also appreciate them too.

It was reported that you converted to Christianity? Is this true?

Can you share with us one of your most memorable moments?

I have so many memorable days, but the day I did my house warming was a day I will not forget in a hurry. I will never forget this day because during the house warming, I rented just three dozens of chairs for the guests because I never wanted a loud celebration, but to my greatest surprise, I had to rent additional 12 dozens to make it 15 dozens. People came in their numbers to celebrate with me. I just planned to mark my birthday in my own house last year, but according to God’s plan, that happened this year February. So, my most memorable day was February 13, this year.

What would be your advice to would-be actors?

My advice to them would be to always exercise patience. There is no profession one finds him or herself, one must always imbibe the spirit of patience if one must succeed in the profession. If God says your own year will be 2020, if you try to run faster than your destiny, you might not get to where you are destined to be. This profession is not that easy, some people do not understand that until they came into it. Even those people who give out their houses for us to use for our movies do see the stress we go through while shooting and they appreciate us. So, there is no profession that doesn’t require one to be patient. Would-be actors should not give pride a space in their lives, because the only thing pride does is to bring you down. So, whatever one knows how to do, keep doing it and one day, you will definitely excel in it.

What are your words to you fans and lovers?

I appreciate them all from all over. Without them, after God and my parents, I will not be where I am today.

I could still practice some shades of Law —Ajirebi’s son, Samuel