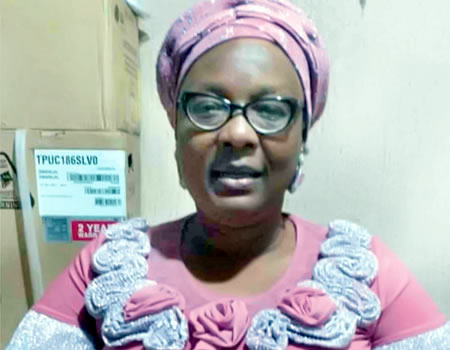 Mrs Biodun Bello is the administrator of the Holistic Outreach Ministry, an arm of the corporate social responsibility of the Redeemed Christian Church of God (RCCG) that caters for drug addicts, commercial sex workers and others. In this interview with SEYI SOKOYA, she speaks on the values of the initiative and what parents should do to protect their children from vices.

What is the concept of the initiative?

This is an outreach ministry that caters for those involved in vices, especially among the younger generation. We restore lives and give hope to the hopeless. We cater for the commercial sex workers, trafficked girls and boys, stranded teenagers. It is a Christian-based organisation established by the wife of the church’s General Overseer, Pastor (Mrs) Folu Adeboye, in 2002.

How has this reduced involvement of youths in vices?

We have achieved all of these through rehabilitation. We take them off the streets to designated homes and place them on various programmes. We have a team that goes out weekly to minister to people on the street and event at hotels. We pray, provide food, free healthcare and many other things. During the outreach, some of the girls indicate they want to come out and we agree to shelter them. We take them to the police station to have it on record that they are with us and they spend minimum of three and maximum of six months. During the period, we teach them the word of God, let them fast, learn how to pray and take them for deliverance sessions. After the period has elapsed, we reunite them with their families. Some families accept them, while others do not. We also update the police on the development. We concentrate mostly on girls from the age of 13 and above. We also take them back to school.

How many people have you been able to rehabilitate since the establishment of the ministries?

We have catered for more than 100 girls. Our main target are commercial sex workers, but we also take in girls that roam about the street and live under bridges as well as trafficked-girls.

What are the challenges you are facing in rehabilitating these girls?

We take a lot of risks going to meet them at these locations and convince them that we have a better place they can call home and at the same time, we tell them about Jesus Christ and His love for them. The challenges we face now are that some of them find it difficult to adjust to the rules and regulations in our homes. These girls were once free and now they are restricted, it is usually hard for many of them. We also do not let them use mobile phones so as to help them avoid distractions from all those who patronise them. There are situations some of the girls would tell us they have sexual urge and may want to sleep with any man available. We have counsellors that advise and pray with them. It is understandable, because they are humans. It is not so easy to stop a lifestyle they have been used to. Most of these girls told us that they did not want to go into prostitution in the first place, but circumstances made them to.

What measures have been put in place in monitoring these people after rehabilitation?

From our findings, we discovered that the situation in the country, especially the economy, makes some people go into this. Many parents don’t know the work their children do.   It is unfortunate that most parents are wealthy in resources, but do not have time for their families, especially their children. Another cause is broken homes. We have been able to address all these through this initiative and it is not restricted to members of Redeemed Church only. Other non-governmental organisations work with us.

What is your advice to young teenagers and parents?