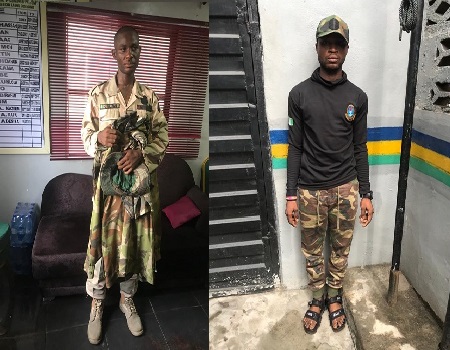 Elijah and his partner in crime had some days ago shot at the DPO of Ilemba Hausa Police Station and his station guard after the police failed to release a motorcycle that was impounded for violating the lockdown order.

The image maker in charge of the state police command, Bala Elkana, confirmed the arrest of the suspects to the Tribune Online and added that investigations were ongoing.

He continued that, ” He is among three suspects on Police wanted list for violent crimes. Four pairs of military fatigues were recovered from his house. ”

“He claimed to have deserted the military in 2015 when he was deployed to the North-East to fight insurgency.”

ALSO READ: Police arrest man for defiling, raping 19-year-old daughter since she was 11

Elkana also added that, “He has been in Ojo area since then, where he has been terrorizing members of the public .”

“He claimed to have deserted the military while undergoing basic military training.

“They are arrested in respect of the shooting and killing of Police Sergeant Onalaja Onajide attached to Ilemba Hausa Division.”

The police image maker confirmed that, “The shooting incident happened on 10/5/2020 at about 2140hours when unknown gunmen fired gunshots at the Divisional Police Officer, Ilemba Hausa and the station guard, Sergeant Onalaja Onajide.”

“The DPO survived the gunshots but the station guard died from the pellets wound. An investigation led to the arrest of the two,” the police spokesman said.

He also added that, “The first suspect was earlier at the Station to solicit the release of his motorcycle which was impounded by the Police for violating the ban on the use of commercial motorcycles.

“Not happy with the DPOs refusal to release the motorcycle to him, he decided to launch the deadly attack. An investigation is ongoing. The suspects will soon be charged to court,” Elkana stated.