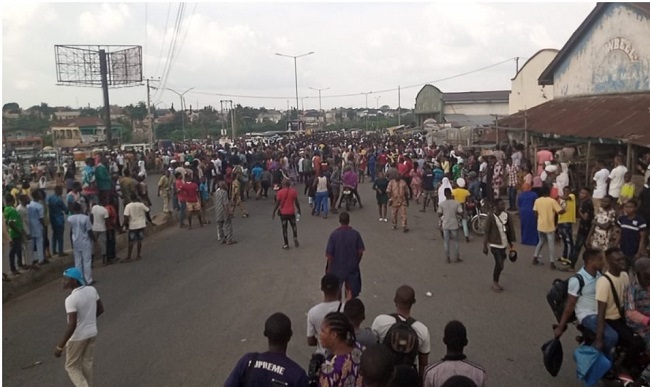 Also, constituency office of the Honourable representing Irepodun/Olorunda/Orolu/Osogbo Federal Constituency, Olubukola Oyewo located at Oroki Estate Osogbo, Osun State capital, was burgled and items like fertilizers, electronics and spraying machines, Motorcycles, all meant for an Empowerment programme were carted away by the angry youths while Iwo local government Secretariat was burnt by yet to be identified people.

An aide of the representative member, Mr Oladimeji Opeyemi while speaking with our reporter confirmed the incident and explained that the constituency office was attacked this morning and some goods were carted away.

The invaders further stormed the popular Tuns Farms belonging to a renowned business Mogul in the state and the Chairman of Osun State Palliatives Committee, Alhaji Tunde Badmos and made away with some valuable items in the farm.

Also, popular Ayegbaju market located at the old governor office, Osogbo was burgled by the fierce-looking youths who were armed with knives, cutlasses, clubs and other dangerous weapons.

However, there is tension presently in the town as people run helter-skelter for the safety of their lives following the pandemonium that enveloped the place.

However, armed soldiers have taken over all the nook and cranny of the state capital. They stationed themselves at strategic places to ensure that, orderliness is maintained.

The Inspector-General of Police (IGP), Mohammed Adamu, has convened a meeting with stakeholders and has agreed to meet all demands raised by the #EndSARS protesters, which include halting use of force against protesters and unconditional release of arrested citizens….Soldiers intervene  Soldiers intervene