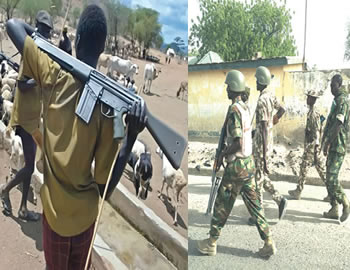 There was gun duel between soldiers and Fulani herdsmen in some communities in the troubled Guma Local Government Area of Benue State Saturday.

Report said that the  suspected herdsmen had, in the early hours of Saturday attacked some military personnel who were on surveillance in local government area, killing one soldier and injuring two others.

But the Theater commander, Major General Adeyemi Yekini  who confirmed  that military personnel engaged herdsmen in the area said he was not aware of any casualty.

Sunday Tribune gathered that the herdsmen had ambushed the soldiers who were on surveillance of the area.

Locals told newsmen that the militia herdsmen, who were said to be heavily armed and in large numbers on sighting the military personnel of ‘Operation Whirl Stroke’, engaged them in a gun duel.

The attack was said to have caused   heavy deployment of security personnel in the area to forestall further attacks on the locals who were just returning home from internally displaced persons camps after several months.

Some locals stated that two helicopters were noticed hovering in the operation camp of soldiers at LGEA Primary School, Mbabegha community for sometime before moving to the scene of the attack.

The  Commander of OPWS, Major General Adeyemi, who spoke with Sunday Tribune confirmed the report but said he was yet to have any record of deaths in the battle.

“Yes, our men went on patrol along Gbajimba and encountered the herdsmen, but we have no record of death or injury yet because our troops are still on the field. However, I’ll let you know as soon as possible.”

Communities in Guma Local Government Area of the state had been attacked several times by herdsmen since the New Year day with over 500 persons reportedly killed.

The unabated attacks had led to the deployment of Joint Military Operations under the code name of Operation Whirl Stroke.