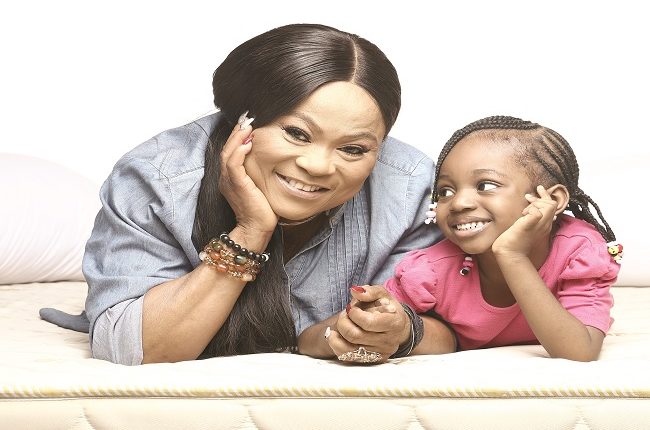 Top Nollywood celebrity, Sola Sobowale affirmed that her present physical fitness which supports her active lifestyle is due to regular use of the Mouka brand, from her early days to date.

The screenwriter, producer and director, made this assertion during her ambassadorship unveiling recently. She said the ‘Mouka Wellbeing’ brand, which consists of the Wellbeing Regal Orthopaedic and Wellbeing Regina Semi Orthopaedic mattresses, has also contributed to her enviable youthful looks and has been a source of ultimate sleep satisfaction.

She said the use of the brand had been an endearing family tradition and that it had enhanced her sleep over the years, helping to support her lower back, hips, spine and other pressure points, thereby preventing aches and pains.

“At a very tender age, I met my parents using Mouka mattresses, even back in those days when my father was a school principal, and my mother was a headmistress.  They saw Mouka as their choice brand and recommended them to students, and that was what I used in my school days to date. It enhances your posture. The next morning, you wake up very active and ready to perform your daily activities,” the screen goddess stated.

According to the Ondo State-born celebrity, Mouka mattresses have been in Nigeria for decades, and their products are of a very high standard. This, she said, had endeared the brand to her. “Ever since I have come of age until now, Mouka’s quality has not changed. I describe the brand as having a heritage of unrivalled quality”, she said.

Narrating how she felt when called to be Mouka ambassador, the award-winning superstar, who had her big break in 2001, in the premiere of Nigeria’s popular TV Drama series, ‘Super Story’ said, “I laughed because l had been using the company’s products over the years. Then l told them to visit my house, that I had many pieces of Mouka mattresses. They didn’t believe until they came.”

Reflecting on her feeding routine, Sobowale points out that she only eats natural food that contains fibre and a lot of vegetables, as well as oats, and not processed food. A proper diet, coupled with sufficient rest on the right mattress, in this case, Mouka, remained her secret to total wellbeing.

FG Increases Hate Speech Fine From N500,000 To N5m
THE Federal Government has announced that its newly- unveiled reviewed Nigeria Broadcasting Code has provisions to increase the hate speech fine for people found culpable of hate speech from N500,000 to N5 million. This is as it said the amendment of the broadcasting code is boosting local content, among other provisions…Sola Sobowale reveals beauty

Chinese Loans: $400m Project Abandoned After Completion
THE National Public Security Communication System project for which Nigeria took a $399.5million from China and has paid $76.83million as part of the principal as well as $84.92million interest has been abandoned, Nigerian Tribune can authoritatively report…Sola Sobowale reveals beauty

China’s Greek Gift To Nigeria
A report in a British tabloid in December 2006 indicated that Britain paid the final payment on a multi-billion-dollar loan it obtained in 1945 for rehabilitation, reconstruction of its infrastructure after the devastating the Second World War. According to the report, its creditors were the United States and Canada, which Britain transferred £43 million and £12 million respectively. The original loan of $4.34bn which was equivalent to £27bn as of 2006, was drawn to prevent Britain from falling into bankruptcy due to aggravated and colossal damage caused by…Sola Sobowale reveals beauty