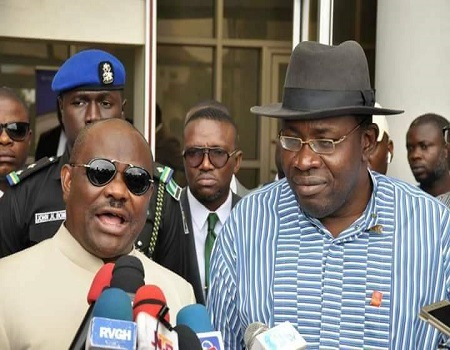 The Bayelsa State Government, yesterday, dragged it’s Rivers State counterpart to court appealing the judgment of a Federal High Court in Abuja, which ceded the disputed Soku Oil Wells to the former.

The Solicitor General of Bayelsa State, Mr Preye Agada, who led the State’s legal team to file the appeal on behalf of the State Attorney General said that the state is seeking a stay of execution of the judgment delivered by Justice Inyang Ekwo on December 26, 2019, pending the resolution of the matter.

The Commissioner for Information and Orientation, Mr Daniel Iworiso-Markson quoted Ageda as having said in a statement on Sunday that the lower court delivered a judgment against the state without joining it as a party in the suit.

He added in the motion on notice in the suit no FHC/ABJ/CS/984/2019, that Bayelsa State was not served the processes in the suit before the lower court delivered the said judgment.

He said that the State Government had also sought an order of the court to appeal the judgment as an interested party in the suit between the Attorney General of Rivers State and National Boundaries Commission.

The Solicitor General said that the State has written all relevant Federal Agencies to stay action on the enforcement of the judgment.

The agencies include the Attorney General and Minister of Justice, the Minister of Finance, the Accountant General of the Federation, the Chairman, Revenue Mobilization, Allocation, and Fiscal Commission, and the National Boundary Commission.

He said further that the contested oil wells which Rivers State describes as Soku Oil Wells are in Oluasiri in Bayelsa State adding that Bayelsa had been receiving the 13 per cent derivation and other statutory allocations accruing from the oil wells for a long time.

He said further that Bayelsa State Government had been waiting for Rivers State and the National Boundaries Commission to cooperate with the Supreme Court directive to properly delineate the disputed areas in the affected areas once and for all.

The Solicitor General said that it was rather regrettable that Rivers State Government which pulled out of the boundary delineation exercise in 2013 surreptitiously file the action after years of inactivity.

The statement appealed to the people of the affected communities who are all Ijaw people to await proper delineation of the boundaries between the people which he said did not have any effect on the historical ties and relationship between them.