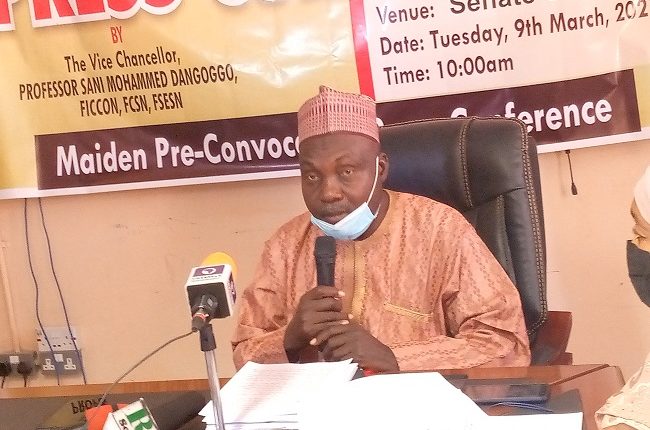 Sokoto State University is set to produce nothing less than 36 first-class honours in her maiden convocation ceremony scheduled to come up on Saturday at the school premises.

The Vice-Chancellor of the University, Professor Sani M. Dangoggo, stated this in his pre-convocation press conference held at the senate building in the University on Tuesday ahead of the convocation slated to hold on Friday, 12 and Saturday 13, March 2021.

Professor Dangoggo said the maiden convocation ceremony is a combination of three sets of graduands from 2016/2017, 2017/2018 and 2019/2020 academic sessions respectively.

He said the school will honour three Nigerians with honourary degree including the pioneer Chancellor of the school, while the convocation lecture will be delivered by the Vice President of the Federal Republic of Nigeria, Professor Yemi Osibajo on Friday.

According to the Vice-Chancellor, “The number of graduating students for the 2016/2017 session is 231 out of which 7 had first-class, 114 had second-class-upper, 109 had second-class-lower while one had third-class division with faculty of science came out top with the highest number of first-class of five.

“In the 2017/2018 academic session, we have 541 graduating students out of who 18 had first-class with Faculty of Science top by 9. 208 graduated in the second-class-upper, 309 with second-class-lower and 6 with third-class honour.

“Similarly, in the 2018/2019 academic session, 701 students graduated with 11 of them having first-class, 207 with second-class-upper, 476 with second-class-lower and 7 with third-class respectively” he added.

Professor Dangoggo further stressed that the school had three faculties and currently running 23 courses with full accreditation of all courses by the National University Commission (NUC).

While commending the efforts of the State Governor and the visitor to the institution, Aminu Waziri Tambuwal, for his support, Professor Dangoggo also commend the pioneer Chancellor of the school, late Alhaji Umaru Ali Shinkafi and his predecessor, late Inuwa Abdul-Kadir as well as the present chairman of the Governing Council, Engr Bello
Suleiman and his team.

It will be recalled that Sokoto State University was established with a license of operation in the year 2009, during the administration of the immediate past Governor of the state, Senator Aliyu Wamakko.

The school started it’s first academic sessions with 774 maiden students in 2013/2014, while the first Vice-Chancellor of the school is, Professor Nuhu Yaqub.

At about 25 minutes, the train slowed down at the uncompleted Omi-Adio terminal, a village on the Abeokuta/Ibadan expressway; it’s a stone throw from Apata in Ibadan. Conveyance of passengers from there and other terminals has not kickstarted as the terminals are still under construction and workers were found there.  Varsity Produces 36 first class  Varsity Produces 36 first class

NURTW in free-for-all fight, one person reportedly killed in Ondo