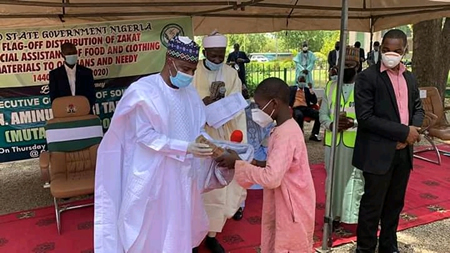 Sokoto State government has distributed items worth N258.8 million to orphans and the needy under its Zakat and Waqf scheme aimed at fulfilling the obligations of one of the five pillars of Islam.

The state governor, Aminu Waziri Tambuwal while distributing the items procured by the state Zakat and Waqf Commission (SOZECOM), said it is in continuation of his administration’s annual intervention in this regard.

This is according to a statement signed by the special adviser on media and publicity to the governor, Muhammed Bello, and released to newsmen on behalf of the Governor Tambuwal on Thursday.

He said, “The government allocated the funds to the Commission in order to enable it to discharge its statutory role of assisting orphans, the indigents and the elderly in all the 23 local government areas of the state,” stated the governor.

“In the preceding year, the government spent N237.9 million on such gesture by procuring and distributing 9,100 bags of rice, bales of clothes and cash, thereby catering for more than 18,882 beneficiaries”

The governor appealed to the wealthy and all the people of the state to cultivate the spirit of caring and sharing, especially at this auspicious period of Ramadan by assisting the poor and needy.

In his remarks, SOZECOM Chairman, Mal. Muhammad Lawan Maidoki said the Commission “has concluded all arrangements for the distribution of food items, Sallah clothes for orphans and cash assistance to the needy” in 86 selected districts across the state.

The Sultan of Sokoto, Muhammad Sa’ad Abubakar, represented by the Wazirin Sokoto, Prof. Sambo Wali Junaidu, gave kudos to the state government for spearheading the move to collect and distribute Zakat and Waqf, a role he said was that of the Islamic scholars.

Wife of Andrew Okeleke, Globacom’s head of PR, dies after being hit by BRT in Lagos