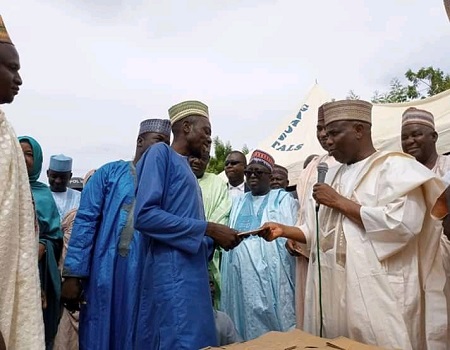 Governor Aminu Waziri Tambuwal of Sokoto state has on behalf of the state government commenced the disbursement of not less than N4 billion as an incentive to people of the state in the next four years.

This is according to a statement signed by the Special Adviser on Media and publicity to the governor, Muhammad Bello, and released to journalists in Sokoto.

The statement explained that Governor Waziri Tambuwal stated this Sunday at Balle and Tureta in Gudu and Tureta local government areas respectively where he flagged-off the
state’s Micro Business Incentive Fund (SMBIF).

He said, “at both towns, the governor who distributed N20,000 naira grant to 1000 people, said the fund will reach the remaining 21 local government areas in the state.

“Speaking at the ceremony, held at Gudu and Tureta local governments, Governor Tambuwal said that, the gesture is aimed in assisting less privileged persons and small scale entrepreneurs in the state, to improve their businesses.

“He explained that the distribution will not be discriminatory as both males and females will benefit from the programme in equal measure, and urged the beneficiaries to make use of judiciously” he added

Also speaking in his address, the Deputy Governor, Alhaji Manir Muhammad Dan Iya said the beneficiaries have been selected to benefit from the gesture in each of the 23 local government areas based on the directives of the governor.

He, therefore, thanked the governor for giving the cabinet members the opportunity to serve and execute various developmental projects across the 23 local government areas in the state.