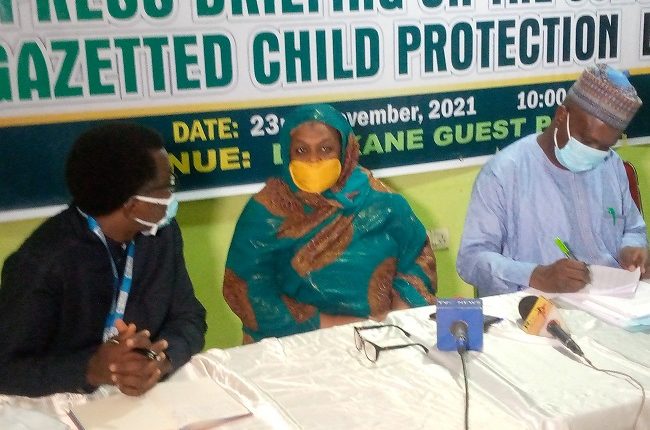 Sokoto State government has assured the full implementation of newly assented child protection law to guarantee the rights of children in the states.

Speaking while addressing a press conference at Dankarni guest inn, Sokoto on Tuesday, the state Attorney General and Commissioner for Justice, Barrister Suleiman Usman (SAN), said the state deployed a different method compared to others to achieve its goal.

He said the new law was arrived at following a lot of engagement, as done in a democratic set-up in making sure that all partners work together to achieve the goal.

The state number one law officer further said that the new law comprises a total number of 205 sections, which includes the right to be born as a child in the state.

He said under the new law, abortion without a reasonable and understanding point is now a punishable offence in the state unless the foetus was removed to save life or whatsoever.

He also disclosed that the law will offer traditional rulers a key role to play in protecting the rights of children and women in the state.

While commending efforts of Unicef, Plan International and other international donor agencies for making the dreams become reality, he added that the state is currently reviewing Almajiri education in the state.

“The new law has taken care of Almajiri system of education as we are fully implementing Indonesia method of which will help us to move to a new level of Quranic education designed in form of Primary and Secondary model of the education system.

“It will also address the issues of parental neglect on their children as the Attorney General of the state has the right to take such parents to court.

While the law does not cover the age for marriage but emphasised that every child in the state irrespective of their religious beliefs must at least complete secondary school education.

He reminded parents in the state to realize that taking care of their children is like a covenant that must be taken with all seriousness.

He further advised residents and civil societies in the state to take advantage of the law as well as the recently assented law on violence against persons (VAP) in the state.

Now is time for restructuring, all is not well with our nation ― Deji of Akure