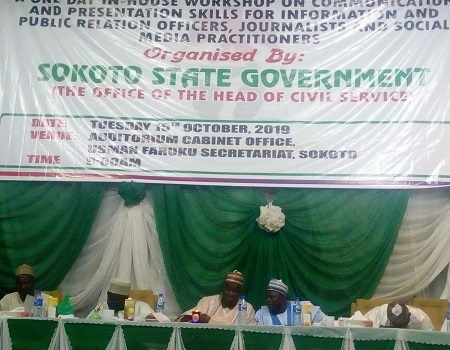 Sokoto State Government has trained not less than 2,400 of the state civil servants drawn from different categories on Informations and Communications Technology, ICT.

This was disclosed by the state Head of Service, Dr Ibrahim Bello Kware, during his opening address at a one day workshop organized for media practitioners in the state by his office.

The state head of service office had organized a one-day In-house workshop on communication and presentation skills for information and public relation officers, journalists and social media practitioners in Sokoto.

Dr Ibrahim Bello Kware explained that the state government has embarked on capacity building for the state civil servants.

He also revealed that not less than one hundred (100) Directors have also been trained on the same ICT successfully since he assumed office in the year 2016.

ALSO READ: Buga returns with ‘It has been baba all the way’

He further advised other Ministry and Departments (MDAs) in the state yet to benefits from the programme to key into it so as to improve their staffers.

The state Head of Service also disclosed that the state government under the leadership of Alhaji Aminu Waziri Tambuwal is ready to always reward dedicated and punctual staffs in the state civil service.

He advised the social media practitioners in the state to be up to date in their stories, saying they should verify the authenticity of their stories before posting.

He warned them that no law will protect any journalists or social media practitioners in the state for violating the ethics of journalism.

Meanwhile, journalists have been advised not to allow biases or favouritism to affect their reports as well as avoid rumours and unconfirmed reports.

This was contained in a paper delivered at the workshop by Professor Masur Ibrahim Sa’id, of the Faculty of Law, Usmanu Danfodiyo University, Sokoto.

Other speaker’s include Aminu Mohammed who delivered a lecture on Feature writing and rejoinders, Abubakar Umar, also talks on Developmental reporting.

They also include Mr Mathews Otalike, a former staff of Nigerian Television Authority (NTA), who spoke on skills needed to be an effective visual reporter or journalists.

Also, Shehu Ahmed, editor of The Path newspaper in Sokoto spoke on ethics of journalism, while Aliyu Jafaru Dangerous Esq, spokes on a dialectical approach to freedom of expression viz a viz rights, duties and liabilities of the media under the Nigeria legal system.

847 soldiers killed, buried in one grave in Borno ― Ndume