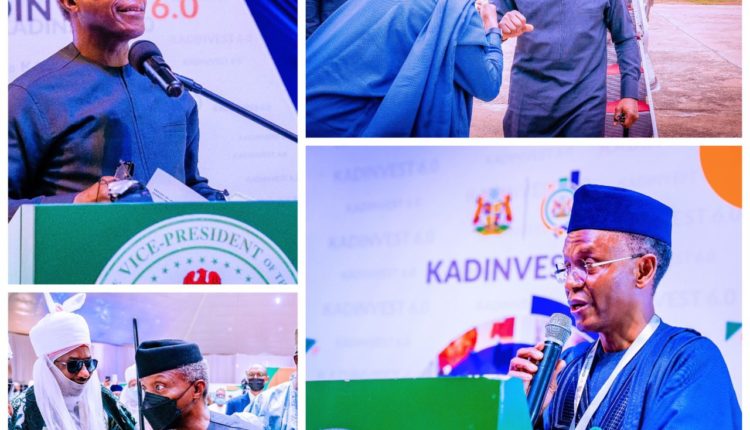 It is the view of Vice President Yemi Osinbajo, SAN, that Nigeria has now become the technology investment destination in Sub-Saharan Africa just as he asserted that the Buhari administration will continue to step up efforts in providing stable macroeconomic, conducive business environment, infrastructure and security nationwide.

He also noted that Nigeria can reap more rewards from maximizing its immense potential, especially that of its youths, in a sustainable way in a knowledge-based economy. This is especially so because there is indeed a shortage of tech talents in the world, and Nigerian youths can fill that global gap.

Prof. Osinbajo stated this on Thursday during a one-day working visit to Kaduna State, where he was the Special Guest of Honour at the Kaduna Economic & Investment Summit (KADINVEST 6.0), with the theme, “Towards a Sustainable Knowledge-based Economy.” KADINVEST, now in its sixth edition, is a platform to showcase and promote Kaduna State and Nigeria as a major investment destination in Africa.

The VP also commissioned the rebuilt and modernized Kasuwan Magani Market alongside a 100-Kilowatts Solar PV Mini-Grid in the Kajuru Local Government Area of the State.

“How do we create adequate resource capacity and capability? What will it take to train and equip enough Engineers, Technologists, Scientists, Doctors, and other products of STEM curricula to drive a knowledge-based economy? Thankfully, we are not alone in this, as there are global shortages everywhere of technological talent,” the VP reasoned.

He continued, “a recent analysis showed that the Artificial Intelligence and Machine Learning talent gap globally stands at 1.2 million resources, while there are only 650 thousand professionals employable in these roles.

“The best OECD countries have 16 scientists/researchers per 1000 employees and spend 1 to 3% of GDP on Research and Development, where do we stand on that scale? How do we accelerate our progress?”

According to him, “with global gaps in talent, well-planned training programmes could even see Nigeria become a hub for critical technical talent. This was proven with the success of Andela in developing and placing Software Engineering talent and can be replicated across a broader range of STEM disciplines.”

Highlighting the great strides being made by Nigerian youth in reaping the rewards of a knowledge economy through digital technology, the VP noted that “Nigeria is now the technology investment destination in Sub-Saharan Africa.”

He explained briefly how. “Here in Nigeria, youth-run digital businesses are also making great strides. FinTech companies and other technology-enabled solutions are expanding so rapidly that the future of banking and financial services may not belong to banks or bankers as we know them today.

“Companies like Paystack which was recently acquired for $200million, Kuda Bank without a single physical branch, Prospa that is revolutionizing banking for small businesses by tailoring banking and digital solutions, and Eyowo that built the platform for TraderMoni and MarketMoni, are creating jobs and crowding in investment.

“We are also seeing the impact of disruptive technology in our critical agricultural sector. Tomato Jos’ processing facility will be commissioned tomorrow here in Kaduna with a capacity to produce tomato paste of 85 tonnes per day (another product of KADINVEST). Tomato Jos is helping build a model for integration of processing and subsistence farming that can be scaled across the country to solve our perennial issue of producing raw materials without knowledge-based value addition.

“Aside from Tomato Jos, there are many other innovative companies doing well in this space such as BabbanGona that provides training, financial credit, agricultural inputs, harvesting, and marketing support to smallholder farmers.”

In the same vein, Prof. Osinbajo added that a “sound, relevant, practical, problem-solving, education” system will further boost national development because a knowledge-based economy “is entirely dependent on intellectual capital, a workforce, and talent pool that is educated, adaptable and dynamic.”

He said the STEAM curriculum being developed by the Federal Ministry of Education, which has added ‘Arts” to “Science, Technology, Engineering, and Math or STEM education is crucial towards “developing an education system that would resource and support the knowledge economy: from teacher training to acquiring technology and other equipment.”

The VP also highlighted the importance of effective coordination and collaboration between the Federal and State governments in achieving mutual goals of infrastructure and socio-economic development.

He noted that the efforts of the Kaduna State government in this regard “are clearly positioned to benefit maximally from the critical infrastructure development that the President has committed so single-mindedly to, since the inception of our administration.

“Federal Government investments in this axis, complemented by the policies and investments of the Kaduna State Government will catalyze an economic hub that will create millions of jobs and opportunities.”

According to the VP, in addition to kinetic interventions, jobs and social protection are vital for security and sustainable development.

“We are making accelerated efforts to enhance security across the country, and in this region particularly,” he said.

Speaking further on the theme of the event, the Vice President noted that that there should be more focus on developing a knowledge-based economy.

Explaining, the VP stated that, “the knowledge economy really refers to how human capital – that is education and knowledge — can become productive assets or business products to be sold for profit. This is simply the commercialization of intellectual capacity rather than natural resources or physical contributions.”

He added that “the trajectory of economic development has tended to be from agriculture and manufacturing to services, and then as countries become wealthier, the knowledge economy becomes the main source of economic rewards.

“But the sheer versatility of technology has made leapfrogging easier than ever before. Indeed, rather than go from stage to stage, the knowledge economy can enhance our performance and benefits from agriculture, manufacturing, and services,” he said.

Shortly after attending the KADINVEST 6.0 event, the Vice President was at the commissioning of the rebuilt and modernized Kasuwan Magani Market and 100-Kilowatts Solar PV Mini-Grid, Kajuru LGA in the State, where he received a rousing welcome from the locals on arrival.

At the commissioning of the market, which had been burnt down during past ethnic conflicts, the VP noted the “importance of community building, partnership, and tolerance amongst our people and a new narrative of growth, togetherness, economic progress, and development.”

Prof. Osinbajo said the unique design of the new market and reorganization of its 942 stalls would encourage interaction and partnership amongst diverse groups.

“Our joint and common interests as Nigerians outweigh our ethnic and religious differences,” he stated.

In the same vein, at the commissioning of the solar PV mini-grid, Prof. Osinbajo noted that “the Ministry of Power through the Rural Electrification Agency partnered with Kaduna State Government and Blue Camel to create a sustainable, clean source of power for the market.”

The Vice President also noted that the Economic Sustainability Plan, ESP SolarPowerNaija project, is aimed at providing 5 million homes with electricity through solar systems and mini-grids, and thus improving access to electricity for Nigerians.

“The funding mechanism for the Solar PV plant today would not have been possible without the intervention of the Buhari Administration. Despite the passage of the Electric Power Sector Reform Act in 2005, the activation of the Rural Electrification Fund (REF) only commenced in 2019, a staggering 14 years after the passing of the Act.

“In the two REF cycles executed thus far, more than N6 billion worth of projects have been executed with 42,000 connections being created, impacting an estimated 200,000 Nigerians.”

The Vice President, who was received on arrival in the State by Governor Nasir El-Rufai, and other senior State government officials, commended the State Governor for his efforts in developing the State.

In his remarks at the commissioning, Governor El-Rufai described VP Osinbajo as “a bridge-builder and a man of deep social conscience, who cares deeply about the poor and about giving them the opportunity to prosper economically.”

Governor Rufai praised the Vice President, expressing appreciation that he came “to commission this project.

According to the Governor, the Kaduna State Government wanted Prof. Osinbajo to commission the market “for several reasons.

“Your Excellency; the first is that you are a man of deep social conscience. You care deeply about poor people and you care about giving them the opportunity to prosper economically. This is one of the reasons why we felt that you are the one that should commission this market.

“The second reason Sir, Mr Vice President, is that you are a bridge-builder. You are a pastor who is a friend to Imams and Emirs. You are a Professor who can speak the language of ordinary people. You are the lawyer who pursues justice, not technicalities.

“You care for people, you care for Nigerians and you care for unity in diversity. You care about differences in religion and ethnicity and you always promote peaceful coexistence.

“No one, Your Excellency, is more qualified to commission this market in this community at this time than Vice President Yemi Osinbajo.”

Members of the Federal Executive Council accompanied the Vice President to Kaduna, including the Minister of Finance, Budget, and National Planning Mrs (Dr.) Zainab Shamsuna Ahmed and the Minister of Power Alhaji Abubakar Aliyu.