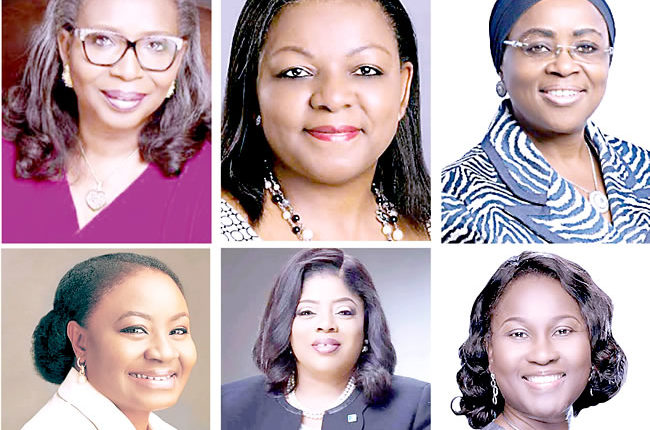 YEAR 2021 started on a good note for the Nigerian women with the emergence of  Nneka Onyeali–Ikpe as the Managing Director and Chief Executive Officer of Fidelity Bank, on January 1, and  Yemisi Edun as the acting Managing Director of  First Monument Bank (FCMB) on January 6,  2021 respectively.

With these latest appointments the number of women currently sitting at the helms of affairs in the banking industry has risen to six.

This is a no mean feat bearing in mind that the banking industry was male-dominated and its leadership, many had thought, was an exclusive preserve of the menfolk.

There is no doubt about the fact that these two recent appointments are a boost to the womenfolk, and it is expected to give the career women an impetus to also break the glass ceilings in their respective organisations. Today WWW presents the six women functioning as the MD/CEO and chairman of the board of directors and of the leading banks in Nigeria.

Pastor (Mrs) Ibukun Awosika, is the Chairman, Board of Directors, First Bank of Nigeria Limited, Nigeria’s premier and most valuable banking brand. She is also the founder and Chief Executive Officer of The Chair Centre Group. She is also a co-founder of Women in Business, Management and Public Service (WIMBIZ) She  is a graduate of Chemistry from University of Ife (now Obafemi Awolowo University), Nigeria; an alumn us of the Chief Executive Programme of Lagos Business School; the Global Executive MBA of IESE Business School, Barcelona-Spain; and Global CEO Programme of Wharton, IESE and China European International Business School (CEIBS). She is also a pastor, a motivational speaker and an author.

Mrs. Bola Adesola, is the Managing Director and Chief Executive Officer of Standard Chartered Bank Limited. A graduate of the University of Buckingham in the United Kingdom, where she studied and graduated with a Law degree. She then returned to Nigeria to study at the Nigeria Law School and was called to bar in 1985. She is an alumna of the Harvard Business School and t the Lagos Business School. She has been in the banking industry for more than two decades. She is also a co-founder of WIMBIZ.

Mosun Belo-Olusoga, is the Chairman of Access Bank PLC and sits as a Non-Executive Director on several other boards, including Premium Pensions Limited, Action Aid and MTNN Foundation. She has served as the Chairman of ELAN, Non-Executive Director of Asset & Resources Management, and Acting MD of Trust Bank for Africa, to name a few. A very active entrepreneur, she also works as the Principal Consultant of The KRC Limited – a boutique training company serving the financial services industry in Africa.

Oluwatomi Somefun is the Managing Director and Chief Executive Officer of Unity Bank. She holds a B.Ed in English Language from  University of Ife, now Obafemi Awolowo University, Ile-Ife,  Osun State and became a Chartered Accountant the following year. She is currently a felow of the Institute of Chartered Accountant of Nigeria (ICAN). The  alumnus of Harvard Business School also attended the University of Columbia Business School, New York. Somefun is a member of the Institute of Directors (IOD), Bank Directors Association of Nigeria (BDAN) and Chartered Institute of Bankers of Nigeria (CIBN).

Mrs Onyeali-Ikpe Nneka, is a very experienced banking professional with over 30 years  experience in the financial services sector. The Law graduate from the University of Nigeria  also holds a Masters of Laws (LLM) degree from Kings College, London, United Kingdom.

Onyeali-Ikpe will lead the bank with the benefit of her experience which has spanned other financial institutions such as Zenith Bank, Standard Chartered Bank and Enterprise Bank, among others. She was a former staff of Enterprise Bank, where she served as an Executive Director in charge of Lagos and South West Regions while also supervising the Retail and SME groups. She successfully set up the SME group for that Bank.

Yemisi Edun was appointed as the acting Managing Director of FCMB on Wednesday last week, after the embattled MD of the bank, Adam Nuru went on voluntary leave. She holds a Bachelor’s degree in Chemistry from the University of Ife, Ile-Ife now OAU and a Master’s degree in International Accounting and Finance from the University of Liverpool, United Kingdom. She is a Fellow of the Institute of Chartered Accountants of Nigeria and a CFA Charter holder. She is also an Associate Member of the Chartered Institute of Stockbrokers; an Associate Member of the Institute of Taxation of Nigeria; a Member of Information Systems Audit and Control, U.S.A; and a Certified Information Systems Auditor.

We have empowered over 17,000 women in Lagos State this year —Commissioner for Women…