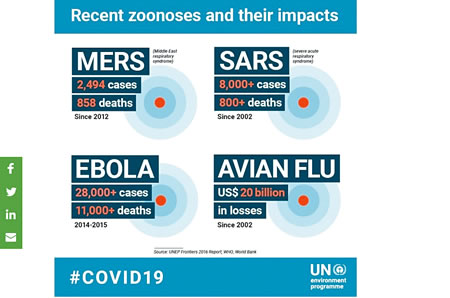 The Ebola outbreak in West Africa was the result of forest losses leading to closer contacts between wildlife and human settlements; the emergence of avian influenza was linked to intensive poultry farming; and the Nipah virus was linked to the intensification of pig farming and fruit production in Malaysia.

Scientists and specialists working at the United Nations Environment Programme (UNEP) have been pulling together the latest scientific facts about the coronavirus—what we know about the virus and what we don’t know.

While the origin of the outbreak and its transmission pathway are yet to be discovered, here are six important points worth knowing:

“Never before have so many opportunities existed for pathogens to pass from wild and domestic animals to people, says UNEP Executive Director Inger Andersen. “Our continued erosion of wild spaces has brought us uncomfortably close to animals and plants that harbour diseases that can jump to humans.”

EDITORIAL: IMF’s Prediction On The Nigerian Economy
WHEN, back in February, the International Monetary Fund (IMF) released its annual growth forecast for the Nigerian economy and warned starkly that “under current policies, the outlook is challenging,” few commentators or people in Nigerian policy circles paid the international organisational any heed. In the report… Read full article