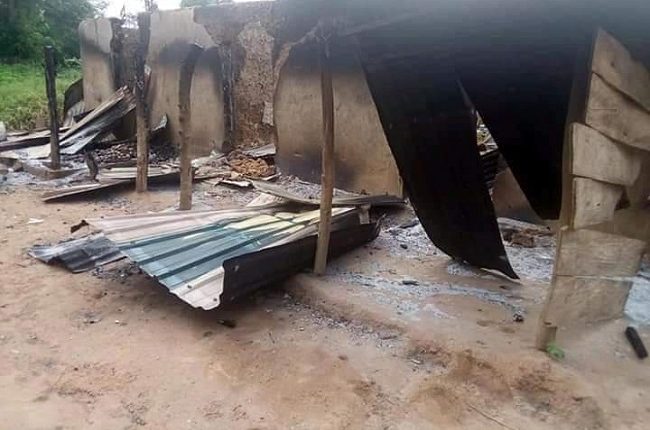 No fewer than six people were killed and several houses burnt on Sunday in a renewed communal crisis between Bonta community in Konshisha (Tiv land) and Ukpute community in Oju Local Government Areas (Igede land) of Benue State.

Locals from the area said that the fresh crisis happened a day after a peace meeting between the warring communities was held in Tse Agbaragba, headquarters of Konshisha local government.

According to local who simply identified himself as Onah explained that the young militias came from Bonta in Konshisha early hours of Sunday and shot sporadically which led to the killing of people.

Onah said: “The elders had earlier on Saturday gone to Tse Agbaragba in Konshisha local government for a peace meeting.

“You know that the same people from Konshisha had attacked the Ukpute community in Obi LGA last week where they killed two people.

“So, it was as a result of that the meeting was conveyed, initially, it was to be held in Obi LGA but the Konshisha people said they wouldn’t be able to come and our people accepted to travel to Konshisha where the peace meeting held.

“It was a surprise to us when some militia in military camouflage invaded Ukpute, Ima, Ochoro, Ekingo and Agbada-Icho where they destroyed several houses including a Church.

“Six dead bodies have been recovered so far,” Onah said.

Meanwhile, Traditional Head of Konshisha, Ter Kyor, Thomas Jam, in a telephone conversation condemned the attack on the communities in Oju.

He said that it was unfortunate that the incident happened again while peace was being brokered among the parties involved.

Jam added that he had contacted the district head of the affected area and reported the matter to Tor Tiv, HRM, Professor James Ayatse who directed that the perpetrators of the dastard act be fished for the law to take its course.

The Police Public Relations Officer in the state, Catherine Anene, a deputy superintendent of police confirmed that there were fresh uprising in the areas in conflict but that the police immediately brought the situation under control.

Anene, however, said that she was not yet aware of anybody killed in the crisis.