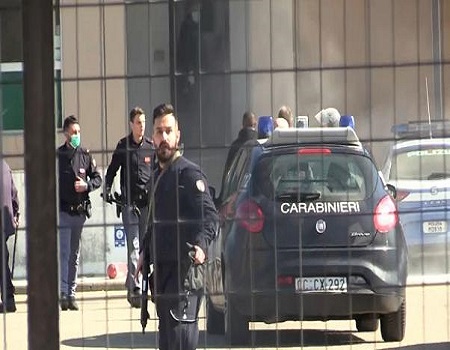 Six prisoners died as riots spread through crowded jails across Italy over measures imposed to contain the coronavirus.

Inmates, many angered by restrictions on family visits, went on the rampage and started fires from Sunday into Monday, authorities said. In one prison, inmates took guards hostage and in another, some escaped.

By Monday afternoon, violence that started at the heart of the coronavirus outbreak in northern Italy had spread south, hitting more than 25 penitentiaries nationwide.

Justice Minister Alfonso Bonafede said the government was open to discussing prison conditions but the rebellions had to stop.

In a sign of the political pressures piling onto his coalition government, the leader of the far-right opposition League, Matteo Salvini, called for an “iron fist” response.

Italy – the worst-hit country in Europe – has reported 366 deaths linked to the virus.

The biggest rebellion began on Sunday in a prison in the northern town of Modena.

Three prisoners died there, and another three in prisons where they were moved after the violence started, Francesco Basentini, a prison administration official at the justice ministry, said.

Some died from overdoses of drugs they had stolen from prison clinics, a justice ministry source said, without giving details on what had caused the other fatalities.

Police and fire trucks massed outside the prison as black smoke swirled into the sky on Sunday. A justice ministry spokesman said the situation there was under control by Monday, and officials were assessing the damage.

Two guards were taken hostage in a prison in the northern town of Pavia on Sunday night, and then freed in a police raid hours later, the prison police group UILPA said.

Inmates revolted in Milan’s San Vittore prison, taking to the roof and unfurling a banner demanding a general pardon.

Further south, prisoners in the Tuscan city of Prato set fire to mattresses.

SkyTG 24 television said about 50 inmates managed to escape from a jail in southern Foggia and more than half of them had been captured.

Italy’s prisons are among the most over-crowded in Europe. “The spread of the virus is a real concern,” said Andrea Oleandri of the Italian prison rights group Antigone.