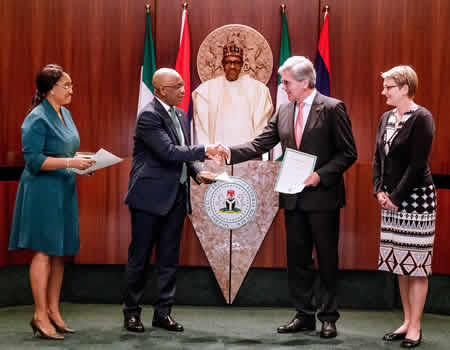 The Nigerian electrification project, which is in three phases, is aimed at achieving 25,000 megawatts of electricity in the country by 2025.

Minister of Finance, Budget and National Planning, Hajiya Zainab Ahmed, said the amount is for the first phase of the three phases project designed to include 23 transmission initiatives as well as 175 separate transformative projects.

Speaking with the Tribune Online in Abuja, Arithmas Aron, Media Aide to the Minister of Power, Engr. Saleh Mamman said already, an interim committee has been set up by the Office of the Chief of Staff in collaboration with office of the Vice President and Ministry of Finance.

He said although the said committee was yet to be inaugurated, it has been named.

His words: “Recently we were told that by January the project will commence. There is a small interim committee that has been set up recently by the office of chief of staff in collaboration with the Vice President’s Chief of Staff and Ministry Of Finance but only that it has not been inaugurated yet but it has been named.

“Both countries have agreed but the remaining part is to approve a small counterpart fund which the president has already obliged. So the management team put in place will start working on that from January.”

He stressed that the Siemens project was not entirely handled by the Ministry of Power but is also part of the presidential power initiative under the office of the Vice President.

The Chief Executive Officer Nigeria, Siemens, Mrs. Onyeche Tifase, had during a television show earlier in August, stated that the 25,000mw target of the project might not be enough for the entire country, but noted that it was a good place to start the growth of the power sector in Nigeria.

“The decision on 25,000mw remains fixed. Nigeria may need more than that. So, for some people, even that is not an ambitious enough target.

“However, by targeting 25gw, it will enable the market to resolve the initial challenges in the grid,” she said.

We must respect our people ― Buhari

Court strikes out charges against five Signatius workers in Delta